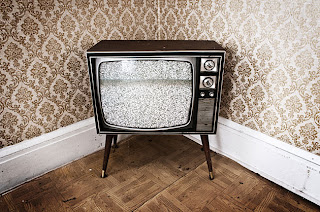 People sometimes liked to categorise themselves as 'morning persons' or 'night persons'. For a long time, I believed I belonged to the latter. My mom would agree. She said as a child, I was hard to put to sleep. One time, she got so exasperated that she simply sat me in front of the TV and went to bed. This happened not just once; I do remember watching much static well into the dead of night on several occasions.

Was this healthy? Did it impair my visual cortex?

I don't know and don't YET know. What I do know is that whenever I needed to do my homework from school, I had to have the TV on. It could be Math, Science or English... I could still get it done and yet follow the storyline on screen. Later in adult working life, I discovered that I could multi-task pretty well. The world outside could be falling apart yet I could design a tuner, test two TVs for color difference and talk to HQ overseas on the phone. Maybe that's the reason why I became a TV engineer early on in my career. Perhaps all TV engineers are like me.

I worked for Thomson TV and one time I was sent to Indianapolis in the U.S. to help troubleshoot a problem. Guess what? All the engineers there each had a 9-inch TV on their desk. They could be watching a Super Bowl game or a Michael Jackson music video... Nobody cared. As long as you do your assigned work, YOU COULD WATCH TV THE WHOLE GODDAMN DAY. I felt I had finally found my commune; to finally be among the other static babies from the rest of the world.

Of course, the joy did not last. I had to come home to Singapore. But that experience assured me that it was alright to be a static baby. Like an equaliser, we could tune ourselves to be receptive to many inputs. It didn't have to be sight or sound alone.

It is weird to be remembering all these when I cannot even remember my old girlfriends' telephone numbers... Numbers that I'd dialled often and meant so much. So why is it so difficult to recall them? Are they sealed up in a mind-vault once the relationship is over? I wonder if women have the same trouble.

With the advent of TV many women also use the medium as a babysitting tool. My mom would feed us while we watched cartoons on TV when we were very young. I particularly remembers the evenings or cartoon time. According to her, we were easier to feed like that.

We watched cartoons after school and we watched cartoons on Saturday mornings. I think these are universal activities amongst kids from all over the world, even today. Ask any TV programmer and they would probably admit to the same thing.

What cartoons did we watch? Mostly the Hanna-Barbera ones like Scooby Doo, The Flintstones, The Jetsons, Tom & Jerry, Quick Draw McGraw, Penelope Pitstop, Mr Magoo, and Yogi Bear. We also had The Pink Panther by Fritz Freleng, an absolute gem. I liked watching Top Cat also because its initials were similar to mine (when I was in NS later, people nicknamed me Top Cat). Then there's the Warner Bros gang of Road Runner and the Coyote. Or Bugs Bunny and Daffy Duck. ('Rabbit Season' was a top classic featuring the both of them in a "Shoot me now or shoot me later" pronoun tussle.)

And boy, did we love Ultraman. Every now and then, Ultraman would fight a different monster. But the same thing always happened: The fight is prolonged, Ultraman's energy is sapped, he fights as if life hangs by a thread. He then escapes into the sun to refuel, returns to fight the monster again, and defeats the creature.

We kids identified with Ultraman because of all that. No matter how difficult the situation, we would become superhuman and overcome whatever obstacles that stand in our way. Crossing our arms like Ultraman might not provide us with an energy beam but reaching for the sun gave us renewed hope and energy. In any case, that's how I saw it in my later years. But as a kid, you get suckered into watching Ultraman suffer and comeback stronger each time. The monsters were also stupid. You know they will die in the end no matter what special powers they possessed, or how ridiculous their claws/tentacles were.

Do you know that Ultraman weighs 35,000 tons? Can run at 450 kph? Or that his energy is only 3-5 minutes long? Thanks to the World Wide Web, I now know these facts. But back then, these facts weren't quite explained. And come on, Ultraman's energy was way longer than the five mins before his chest light blinkers on and off as a warning that his battery is low. (At last count, Ultraman had over 30 special powers).

But the biggest attraction of Ultraman back then was that you could be someone else by just squeezing on some sort high-tech stick. In the story, it was always some kind of baton with a button much like a light saber without the light. Later, this evolved to become gun shaped.

I also learned later that once in a while this 'baton' would be passed on and a new type of Ultraman would be introduced. To date, there have been 29 of them. The 30th - Ultraman Saga - will be introduced next year in 2012. I also didn't know that over the years there had been fake Ultramans. Creatures that looked like some sort of Ultraman but were evil. He is often enhanced by some dark color in his costume or some evilly shaped eyes. No more the salted egg (ham tan) look. In Hong Kong, Ultraman is known as ham tam chew yan or salted egg superhero. This is in reference to his bulging white/yellow eyes.

The good news is that Ultraman is still popular amongst kids after all these 45+ years. You can still buy and collect various VCDs and DVDs of his exploits. Watching them now as an adult, I also begin to wonder why I ever liked McGyver so much. It looks very predictable and dated now. But not for Ultraman. The cast changes, the Ultraman transforming baton is passed on to the next generation, cities look a little more modern (but still burned and flattened by the monsters in the end), and Ultraman's brothers come and help defeat the invading monster and chuck it back into space. The stories still stand tall in our minds just as Ultraman did in the 70s in all his 40 metres before flying into the sun.

The stories were also no different from any formulaic Indian movie, why I think Ultraman the TV show beats McGyver any time. And kids being kids, they will never outgrow such primitive story premises. Good Vs Bad; Weak Becomes Strong; Struggle Becomes Success. Good-Triumphs-In-The-End.

You might say McGyver is a hero but he is also OCD (obsessive-compulsive) when it came to solving problems with gadgets. As a character, he is ripe for a parody. I wonder why nobody has done it yet.

I have watched TV till static come on and then some. What I've learnt is that if you are selective about what you watch, you can learn a hell lot more than reading a book. Call it "programmed video education"; we all do it, don't we? Watch TV to keep up with popular culture, for instance. When I was in Public Relations, I did just that. How else could you  relate better to a client in a light moment? Talk about families? Nah.

And the information could come in handy when savvying up a speech for a top CEO.

So, I am glad I am a Static Baby. I've watched a lot of TV for the right reasons but mostly, it is because I am a night person. The VCR and now DVD recorder has helped. But for the moment it is Blogspot that leads me into the dead of night. PC monitor static, anyone?

Next story: Crazy Aunties
Posted by TC Lai at 11:35 AM