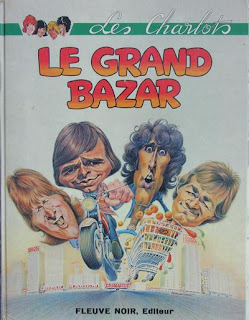 Growing up as a kid in Geylang, I think I laughed more than I cried. I laughed with my buddies in the backlanes, I laughed with my buddies in school. I think I was generally a happy-go-lucky kid. My dad might seem fierce and stern most of the time, but he had his moments of levity, especially when it came to his choice of movies. I think his favourite was a series by The Crazy Boys - a French troupe of guys who often found themselves in silly situations created by the jobs they took on. It's a bit like those Hong Kong escapade movies in the 80s starring Alan Tam,  Richard Ng and the rest of the Lucky Stars gang. Or the Hui brothers comedies with two more kakis in the mix. The actors were all skinny, wore bell-bottom pants, and had long wavy hair...very typical of the times.

The movies were often named after their latest adventures, such as The Crazy Boys Go To The Supermarket or The Crazy Boys At The Games. In their own country France, they were known Les Charlots (Charlot was what Charlie Chaplin was affectionately called there). Here, we watched all their movies dubbed in English.
TCBGTTS is available on Youtube if you want to watch it again. You will understand why a kid would laugh until his sides split. The action or antics were often ingeniously contrived and their actions slapstick, much like Chaplin or Harold Lloyd. Lloyd was a fella I watched quite a bit as a kid. I found him more modern and deadpan funny than Chaplin.
As for the TCB movies, me and my siblings would watch and imitate them afterwards with cardboard boxes and blankets as props. Come to think of it, they were quite like the Monty Python gang although their stories were less ironic in humour and execution. And less gross than Jim Carrey's in the Ace Venturer series. How times have changed!
Another movie surprise my dad sprang on us was the one about copulation between animals. It was called Sex and The Animals and people often wondered why, as a kid, I was brought to see such a brazen documentary movie. My answer would always be, It's never too soon. Maybe it helped that we kept and reared pets as kids, so by age five, we knew all about birthing and dying; just not so clear about what's in-between!

Sure, we have seen dogs do it unashamedly by the roadside, sometimes stuck backside-to-backside. Sex and The Animals gave us that and more. For every sexual encounter between animals, there's always a courtship dance between  them first. Often the male being the more gregarious one. The movie wonderfully moved our understanding of domestic sexual behaviour to those in the wild (Africa).

And oh, if you want to know which animal has the longest penis, it is the boring barnacle. It's penis is 50 times the size of its body. Yup, it goes out of the shell and gets waved about quite a bit. One hopes no fish will find it a delicacy. Amen to that.