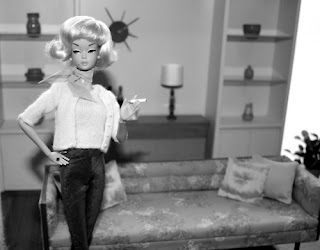 The house that I moved into at Geylang Sims Avenue was previously occupied by my grandma, uncles and aunties. They were in their teens then, the youngest being eight or more years older than I was. Their family background is a bit complicated. I call them my uncles and aunties but they are actually my mom's adopted family. My mother's parents perished soon after the war and she was left in the care of a good friend of her dad's. In those uncertain times back then, it was normal to have sworn sisters and brothers so you could guarantee some future for your own children should something untoward happened to you.

My uncles and aunties real parents also passed away early in that Geylang house, why subsequently, the tenants after us would complain that it was terribly haunted. They would often see a man and woman in their 40s appear in the hallways. Perhaps that one time when I saw a pair of ghosts was actually them.

My aunties' mom passed away because of cancer, so her sister-in-law took over as mother to her children. They all treated her like a mother but called her "say ku" or fourth aunt.

Into this mix was an aunty from my father's side. She stayed with us for a while. Her stay didn't last long because she was rather insane. My mom often told us how at certain times of the month, this aunt would remove her sanitary pad and showed it around, asking (in Cantonese): "Eh, why like that one?" -even when you were busy cooking over a wok.

This brood of uncles and aunties from my mother's side consisted of three sons and two sisters. There was another son but he committed suicide with his girlfriend soon after his parents disapproved of them dating. Back then parents were very strict about such a thing while still studying. It was a pity because that boy was a brilliant student. The other boys in the family were also a studious lot and loved to read and play chess. The eldest seemed to have the greatest potential and my mom was asked to sacrificed her own studies so she could work and help send him and the others to school. She shouldn't have because he was quite the ingrate, never quite repaying my mom for her sacrifice. My mom was intelligent so she could have made something more of herself if she had the chance to finish school.

In those days, studious people tended to have a rather narrow outlook in life. They also had poor people skills and most times think the world should all behave in a certain way. I think my uncle took it as his birth-right that people should help him through school.

Unlike my uncles, my eldest aunt was a talkative person who was very witty and had an opinion on almost any subject. She was the one who dated this guy from a tailor shop near Gay World and who drove a Mini. We often accompanied her as little chaperons.

One day, at our home, she ushered us children into a room. It must have be a Chinese New Year holiday or something because we had other children visiting also. We thought she was going to teach us a new game or tell us a story. Instead she whipped out her cigarettes and proceeded to light one up. She then passed it to me. "Take a puff," she said. Whoah! I was surprised. Is this really happening?

My dad smoked but he was very adamant that we didn't. That made me very curious. Many a times, when my dad sent me out to buy cigarettes from a neighbouring Mama store, I was tempted to light one up but didn't. The closest was to put one to my lips and pretended. Now, finally given the opportunity to smoke one, I took it and puffed. I think I choked and coughed almost immediately. Tears welled up in my eyes. It was altogether quite terrible!

The other kids took turns to puff. Our decision was unanimous: Smoking tasted awful! How can anyone smoke such a foul thing!

My aunt laughed and took back what was left of the cigarette. "See," she said, and wagged a finger. "This is why you all shouldn't smoke." I think she made her point that day. I am grateful because that unpleasant moment of smoking stuck forever with me. Not once was I ever tempted to start. Not in school, not in the army during National Service.

The only thing I tried a few times was a cigar. And that was because it was a bit of a craze in the late 90s, together with wine appreciation. Even girls smoked cigars then, preferring the slim ones.

So I was only five when I started smoking and stopped.

Another aunty that was rather unusual was this lady who was a good friend of my mom's. She lived in Bedok along Lor Haji. Her husband was a pharmaceutical rep so they were pretty well-off. They stayed in a single-storey bungalow not far from a big kampung there. Going to their place was like driving into a jungle. And because the house was surrounded by vegetation, mosquitoes abound after sundown. We often had to take a cab there and bring along "mun yau", which was a tiny bottle of Axe brand medicated oil good for bites as well as a repellent.

This aunty had a daughter. I always remember her as someone very pale and skinny. According to my mom, she was always having terrible periods, why she was often pale and weak. The last time I saw her was at a Pre-U seminar in the old Nanyang University campus. I wonder how she is doing now, if she still looked as pale as a vampire (great for a role in Twilight) and if she still suffered from menorrhagia. Kind of ironic and tragic for a vampire to suffer from that disorder, actually.

I think a reason for her being so weak could be that her mom had not wanted her in the first place. When she was pregnant with this 'cousin' of mine, she actually wanted to abort the child. Apparently she and her hubby didn't get on very well. He travelled often because of his work and she didn't quite like that. This aunty was rather pretty in a vivacious way. She had one of those beehive hairdo  popular with many Hong Kong actresses then, coiffure like those worn by Siu Fong Fong and Chan Poh Chu. She also liked to dress in designer pant suits, altogether quite the "happening" chick in those days.

The way she went about her abortion was classic. Instead of going to a doctor about it, she decided to climb and jump off a coconut tree. Staying near a big kampung like that big one in Jalan Haji in Bedok meant she was not short of coconut trees to choose from. And she choose did. Another method she tried was to eat copious amounts of pineapple. This method was common folklore then. In the end, I don't know what happened, but my 'cousin' was born. She was a sickly baby and grew up so. The only consolation was that her dad dealt in drugs and could give her free medicines for her condition.

Because my aunties were older, they kind of adopted me and my brother as godchildren. The eldest aunty doted on my brother while my youngest aunty wanted to do likewise with me. But I had have enough of crazy aunties and resisted. Besides, she was too nice and pretty. I just couldn't see her as aunty material. Nope.

Related story: Book of Life and A Firecracker Fight Next story: Dog Fight Porridge
Posted by TC Lai at 12:01 PM