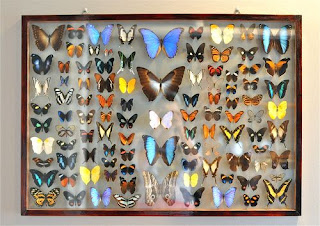 It doesn't often happen to people that they would spend a period of their childhood overseas. Certainly not in the 60s and 70s when folks were mostly trying to eke out a living. I was quite fortunate because my dad worked for the Caterpillar company and he travelled in the region because he was their plant engineer. For those of you not familiar with engineering vocations, a plant engineer is one that worked on heavy machinery or is involved in the operations of a factory. It's not a fancy name for a gardener.

My dad travelled also because of the Vietnam War. He spent a stint in Bangkok to support war-related plant works there. When they needed him to look into the operations of a matches factory in Kuching, Sarawak, we all got packed and went with him. Only my eldest sister stayed behind.

The house we lived in stood alone in the middle of a large field. It was a single-storey bungalow that was average in size. When we first arrived, we were placed in a 2nd-storey staff apartment. But because my mom was often harassed by an over-amorous ang moh, and to avoid my dad killing anyone, we moved to this lovely little house on the outskirts of town. We all fitted in quite nicely. I was three, so I didn't occupy much space. But the broom my mom had used to beat off that ham sup (lecherous) ang moh stayed by the patio door.

Kuching back then must have been pretty wild and pristine. We spent a lot of time in our field running around with butterfly nets. The butterflies were plentiful and came in a variety of colours and sizes. There were monarchs, crows, clippers, Costa Ricans, etc. Go to an Asian butterfly museum and point one out. I'm pretty sure we saw a similar one in Kuching too. Besides butterflies, there were plenty of moths as well. And as I learnt later, there are also such things as butterfly moths and moth butterflies. They had been in that field too. (Do you know that there are butterflies with transparent wings as well? I saw one in a private museum collection in St. Tropez, France.)

So what did we do with all the butterflies that we had caught? We displayed them in picture frames for hanging up. Yes, the same butterfly-in-a-picture-frame kind that you'd find in souvenir shops. I saw some lovely ones in Cameron Highlands and Sentosa's Insectarium. We seldom pinned them but pressed them down with a backing of thick cotton wool against the glass.

Catching butterflies was fun but you had to watch your step. I cut my knee one time on a sharp edge after tripping in an outdoor wash area. I hadn't been paying attention because I was sucking on an orange slice and chasing after my siblings who were themselves running after some butterflies.

The biggest specimens we caught were the Atlas moths. These we arranged in a diamond-shaped picture frame with the moths facing each other. They fitted the shape perfectly and always looked impressive with their standout camouflage.

I remember the time we had to catch one Atlas to complete a set. We waited and waited but none came. One day, whilst we were plucking French beans on the patio, we noticed a large one settling on a fence of creepers and morning glories. We immediately threw down the beans and used the baskets to 'kope' the fella. Kope as in cup the Altas between them. Singlish. It was evening, close to dinnertime, but we were so happy to have finally accomplished that.

After having caught the flutters (easier to spell, lah) we would put them in a glass jar that contained a layer of pounded mothballs. These balls were made of napthalene and the fumes would knock the flutters out. In the past, it was common practice to throw a few mothballs into cupboards and drawers to protect clothes from insects and moths. You can still buy mothballs today but they are not as pungent as they used to be. They were mostly white back then.

My mom was the innovative one who devised the whole preserving and display process. To preserve them, she would inject kerosene into their bodies to dissolve the innards. I am not sure if this was the same way so-called professionals did it in that time, but our framed butterflies kept. They remained pristine in condition long after we left our nets behind in Kuching.

Catching the flutters with my siblings, I learnt to net and handle them without damaging their wings. To catch them, you could use your fingers or a net. What size net you use depended on the size of the butterfly (duh). Not only that, a longish net allowed you to fold the net down so the butterfly would be pinned inside. You could then inspect the insect more closely without it escaping easily. You could also pinch-hold it better.

To catch a butterfly with a finger, you would have to wait for it to settle on a flower or plant. You needed to stealthy, else the flutter would flit away. That's how we got started: one fruitless chase after another before we got the hang of it.

Besides the numerous butterfly guests in that wild, lallang-filled field, we also had our share of creepy crawlies that found their way into our house. One day, while playing blocks in the living room, I looked up and saw a giant spider - easily eight inches across - staring back at me from the corner of the ceiling. It had a bulbous brown body and long spindly legs. That was my first big spider and it caused me to be more wary of things my surroundings after that.

Not all creepy crawlies were shooed away; we caught and preserved some of them. Insects like dung beetles, stick insects, scorpions, etc. We would eventually place them all in a long brown display case that measured six inches tall and 1.5m long. We dressed it up with twigs, sticks and dry leaves. For a long time, that was our very own natural history museum.

My dad was quite adventurous one day. He took the entire family to visit a local tribal longhouse. A lasting memory of him has always been looking at his back whilst climbing up a narrow ladder that leaned up against a thatched platform. The ladder was nothing but steps cut into a smooth, dark log. There were no handholds. So you simply climbed foot over foot holding on with your hands. I remember thinking to be careful; perhaps why the memory stuck. We eventually had a nasi lemak meal in the house. Everybody complained that the chilli was hot. Before we left, we all sat down and took a group photograph. I still have that photo.

We also visited the Kuching Museum. I don't remember much from that visit except that there were some tribal shields and spears on display near the entrance. We all stood by our favourite shields and took a group photograph.

Staying that year in Kuching, my mom made a good friend in Miri. Her family operated a shipyard there in that coastal town. Often when we visited, we would stay for dinner. They would serve us lobsters that were caught from a nearby fishing hole. They seemed plentiful at the time. One unforgettable meal they served up was a large monitor lizard they had caught hiding behind some machinery. Cut into cubes and cooked in a clear soup, it tasted like chicken. I remember thinking, "Hey, not bad!"

This family had a son who was roughly the same age as my brother. They got on well and became pen-pals. Whenever he and his parents visited, they would stay in the old Peninsular Hotel. I remember one time they bought me a gas-engine powered model aeroplane as a present. You know, the sort that you control with a pair of strings to fly around and around in a circle. It's a giddy sport but I learnt quite a bit about combustion engines. The plane was a green P-51 Mustang model - a plane used in World War II. I was, of course, over the moon with that gift.

For us kids, our time in Kuching was pretty much carefree. I only recall my brother having to attend the Sunny Hill School. It was pretty special for him.

Because I was very young, that year in Kuching often felt like a dream. A dream where butterflies were plentiful, the chirping of crickets loud, and the croak of the frogs constant. Having grown up much in the urban jungles of Singapore, I feel privileged to have witnessed a place that was largely unindustrialised and unpeopled then. I've never been back there since but as the largest city in Sarawak, Kuching couldn't have escaped the rapid urbanisation that infected many Asian cities since. I just hope that her pace wasn't as rapid as Singapore's. And that patch of earth we called home one time in the 60s is still there, along with the butterflies, moths, stick insects, beetles, spiders, squirrels, etc. - maybe a hopeless wish, but for once, I wouldn't mind being outnumbered by them.

Afternote: Recently my mom disclosed to me how she actually preserved the butterflies. The liquid she used was kerosene first soaked with napthalene balls and then injected into the butterflies when they were semi conscious via the abdomen end (the pointed tip had to be snipped off). In this way, the embalming liquid would be pumped through the wings spreading them out. You cannot do that with a dead butterfly. Point noted. ;-)

In Sept 2015, I was having a casual conversation with my mom when she told me that we actually brought along a large tin of "soda paeng" (plain soda biscuits) when we visited the longhouse. Our native host in turn gave us "kum gua" (pumpkin) and a small quantity of purple colored rice grains which my mom said was excellent. "It tasted great like glutinous rice but cooked in the usual normal way." My mom also said rice was what the natives had a lot of, why we brought biscuits. And the reason we went to visit them was that a boarder at our house was a native tribes person. And two weeks before we were to head back to Sg, she graciously invited us to visit her longhouse folks. Sweet!

*Three years old +, having my first taste of nasi lemak inside an Iban Longhouse.
The rice was served on banana leaf on a small round basket tray. 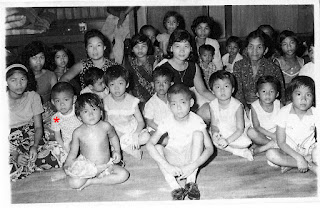