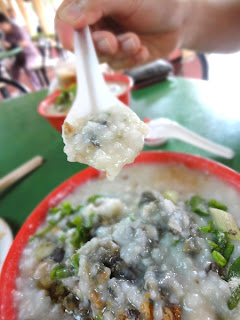 I've mentioned earlier in another blogpost the kinds of memorable food from my childhood. But there is one dish that I did not say much about that is close to my heart: Shredded Chicken Porridge.

I am Cantonese, and like the Teochew, we like our porridge. But there is a difference. Unlike the watery Teochew moi, Cantonese porridge is more robust (thicker) and full of ingredients. The porride is often cooked with different types of pork meats and innards. Century egg and salted egg would be added too. At times, the porridge is served with a platter of sang yue or raw fish - altogether a very heartwarming and appetizing affair.

I know of only one good Cantonese porridge place in a hawker centre in the whole of Singapore and that is Hai Kee Famous Porridge at Amoy Street Food Centre (#01-45). I can guarantee you that it will be different from any porridge you have tasted. They also serve the raw fish platter as mentioned before. Quite cheap given today's inflationary prices. It is normal practice to crack an egg into the porridge before serving. Tell them if you want it like that. This will give the porridge added robustness and a yolky flavour.

When I was growing up in Geylang, my mom often liked to cook us kids Duck Neck porridge. It is what the name implies. Duck necks were the often discarded parts of a roast duck. It still is, actually. Roast duck rice sellers would either give them away or sell them dirt cheap. Some people do not like the neck part for fear of antibiotic and such other growth inducing injections to the duck, but necks are often just as flavourful as the rest of the duck. Maybe more so. There's precious little meat but there is a whole lot of skin. And if the duck is herbal roasted or stewed, man, that neck is super succulent! Herein lies the secret: Roast duck necks are actually very good as snacks to go along with a beer or a glass of sake. If you like, glaze it with honey and sprinkle it over with sesame seeds; then roast it a little in the oven . This will give it added sweetness and aroma and cement its status  further as a special  finger food.

Into Duck Neck porridge go peanuts, century egg, duck meat, parsley, fish cake slices, etc. It is highly delectable and I often wonder why no one seem to sell it at the hawker centres. Duck necks are, after all, still cheap and freely available from the rice stall sellers. They might charge you 50 cents for one or a few dollars for a whole bag. It is seriously value-for-money! The Hainanese has also embraced this Duck Neck porridge and they can cook up a pretty good one as well.

Porridges are not just for sick people. I find eating porridge useful for revitalising one's taste buds, especially after a bout of outside-of-home eating. It somehow feels detoxicating. I used to have a Dutch colleague who said that only old people in his country ate porridge. Well, if they had expanded upon their culinary skills, they could have had more types of yummy porridge to enjoy! In other places of the world, porridge is often oatmeal, not soggy rice.

The porridge that gets to my heart always and which reminds me of a childhood incident is gai see juk or Shredded Chicken Porridge. A man who lived at the first house of a row of kampong houses in Lor 17 used to sell it from his mobile cart. We would often have it for supper and my mom would send me down with a metal pot to 'tapow' (pack) it back, often with an egg for added flavour and nutrition. His gai see juk is not like the pale imitations of today, which taste more like porridge with pieces shredded chicken thrown in. His had subtle chicken flavour and a whole lot of ginger. The ginger acted like lemon on fish and brought out the sweet aroma of the chicken porridge. It was also uplifting and refreshing, this smell of ginger.

I didn't have such kind of porridge again until years later when I took up scuba diving in the later part of the 90s. We trained at the pool in Raffles Institution in Bishan and afterwards, would accompany the instructor and fellow trainees to a bit of supper. A popular place was Swee Kee Chicken Rice opposite Novena. They served chicken porridge too.

The first time were were there, we were hungry and cool. Cool because we had spent like some two hours plus in the pool. We all looked forward to something warm and filling. It didn't matter what that was.

A warm bowl of porridge sounded like a good option and so I ordered one. At Swee Kee, they have a jar of condiment that they leave on each table. It is minced garlic-ginger in sesame scallion oil. When the porridge came, I took two big wallops of it and mixed it in my porridge. My, oh, my. That aroma of ginger and chicken wafed in the air and transported me back to Geylang all those years ago. Back to Lor 17, standing there watching the uncle throw ginger and chicken shreds into my family pot and then scooping porridge into it. I kicked myself for not knowing the popular Swee Kee eatery earlier.

Since then, whenever I want to eat succulent gai see juk, I'd always tapow from Swee Kee's. I would make sure those packets of porridge each had a big wallop of that garlic-ginger condiment. It makes a whole world of difference!

Now, rediscovering my favourite gai see juk is one thing. I've also rekindled memories of a time when I suffered an ignominious injury because of that. I was as usual, walking in the backlanes of my area when I came upon a huge Alsatian dog. Unlike most Alsatians, this one liked to bark and growl. The owner (that porridge seller) kept him on a leash. But sadly that leash was just an inch too long that day. As I tried to squeeze past that dog in the narrow backlane, it lunged. It bit my ass leaving two neat and small puncture holes. I held back my tears and tried not cry, and slowly ambled my way home, which was just a short backlane away.

After reaching home, I dared not tell my parents for fear of being scolded, so I rubbed Zam Buk on the wounds and tried my best not to show that I had a sore bum. But a few TV shows later, I was convinced I would catch rabies and so confessed. I told my sister first and then we told our mum. She, of course, was pretty livid. But mostly she was concerned. She brought me to Phang Clinic (our family doctor near Lor 27) and there I received an injection for tetanus. I am not sure if I was ever given a shot for rabies. In any case, I think that has no cure after a certain stage (like foaming at the mouth). I felt much better and was able to sit at the dinner table with half an ass without having to explain really hard why.

Next story: A Chopper Legacy
Posted by TC Lai at 9:58 PM