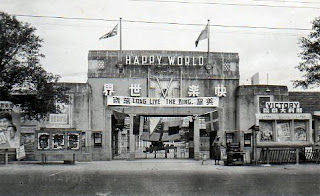 Besides Geylang, I also lived near two worlds: Gay World and New World.

Gay used to be such a happy word.

These days, it has connotations of sexual orientation. You can't openly say you are gay anymore even if you mean it. It is better to say "thrilled", "excited", or just plain "glad". I think glad is on its way out. It sounds rather archaic. A good test is to include the word in a rap. Somehow, any rap with the word 'glad' makes it grandmother safe. So.

In any case, growing up in Geylang, one cannot escape not going to Gay World. It was situated near Mountbatten Road end, on the side of the even lorongs opposite Lor 7. I lived on the side of the odd lorongs and would often use them as a reference. Today, the even lorong side is where you have the red light district. It begins right from where Gay World has left off.

My most vivid memories of Gay World were about shopping and the basketball and wrestling activitiess at its stadium.

Gay World at the time had a Chinese emporium called Sin Wah Emporium and my folks would bring us kids there to shop. It's your typical departmental store set up: wares displayed upon rows and rows of glass shelves. The walls paneled in mirror. Us kids liked to run between them to play peek-a-boo often getting reprimanded by our mom. "Break anything and you'll pay for it!" she would sharply say. Still, a visit to the emporium meant looking at new things from far away. We knew about China, that it was a big country somewhere across a big ocean. At the time, we thought all Chinese dressed alike, you know, in their green Mao suits; and that they probably saluted like Hitler. At one point, I thought how cool it was to have a grandfather as a leader. That genial Mao portrait was everywhere, even on collar pins.

I wore singlets to school as an undershirt and these were often bought from Sin Wah. Another garment item we bought from there were these round-neck "ah pek" tees that my dad liked to wear around the house often accompanied by just his inner shorts. These tee shirts were made of polyester but was cool to the touch. They were very popular with the uncles who manned the TCM medicine shops; it became their signature wear. Trishaw uncles also wore them, as did uncles who made and served coffee at the local kopitiams (coffeeshops). That's a lot of people saying that this garment was cheap and comfy to wear.

Today, I buy them whenever I can and use them as pajamas tops. They used to come in Rabbit brand, but the current one is Chung Tai with five sixes (66666) on its label. Man, they are cool to sleep in and do not crease as much as cotton. Very comfortable!

Us kids loved Sin Wah Emporium for its toys. Toys back then were made of tin and were often springwound for action, not battery operated. If they were, there would be flashing lights and sounds; or that they ran around a track.

During my childhood time, we began seeing more plastic toys. So our toy box was became a mix of tin and plastic playthings. Some of the toys we bought from that emporium over the years included a toy gymnast that went round and round on a single bar; a xylophone; a set of Chinese checkers; a pair of Chinese fighting swords (that were flat on one side and could fit together in the same scabbard); an inflatable beach ball with segments of colour that we brought often to Changi beach; a battery-operated red plasticky robot that shuffled along and whose chest would open with guns blaring; a twirling rattler toy for babies that made a 'klong-klong' sound (you would hang this over their beds); model airplanes of CAC, China's main airline. Oh, we bought our Airplane brand of badminton racquets, shuttlecocks and nets from Sin Wah Emporium too, including skinny ping pong bats, and balls.

There could be more but these are the ones I remember best. (And I was mightily pleased (glad?) to see all these toys and more (e.g. the old brown paper provision shop bags with red-white strings) at the Museum of Shanghai Toys in Rowell Road some years back. And some shops have started selling that soothing rattler toy again (for less than $6). Funny isn't it, how something so long ago can still be useful?!

My favourite toy was actually a stuffed dog that came in a checkered vest that seemed Scottish in design. Or looked like a bartender. It had a dachshund dog kind of face that reminded me of that famous but rather droll cartoon dog, Droopy. I think it was a detective or something. But this stuffed dog was bought from a large stall/store along the Lor 7 morning street market, not from Sin Wah. We often bought pillows and blankets from that stall/store as well. (That large 'stall/store' was a makeshift boarded up place. Maybe it was an extension to a five-foot-way shop there.)

At Sin Wah, because we were a large brood and curious, we would often lose ourselves in the store. To gather us, our dad would whistle something like a  phew-wee-wit! sound and we would all run back to him. My mom wasn't very please about it b'cos she didn't like us being herded like dogs. But in a crowded place where kids like us could only see the shoulders and backsides of adults, this kind of whistling was effective, and perhaps, reassuring.

There were many snack stalls in Gay World itself and one of the things we liked was steamed peanuts. If we could get candy floss, that was a real treat!

I think I grew up at the tail-end of Gay World's popularity. It slowly morphed into a basketball and wrestling venue, not so much for amusement and shopping... probably because of competition. Chinese emporiums were everywhere then, even one in Katong somewhere near that famous red-house bakery. The one at People's Park Complex - Ta Chung - was hugely popular for its size and range of goods. Ta Chung remained popular for a long time during which many other emporiums were being absorbed by Emporium Holdings. This company then re-branded them or opened up new ones in all the major housing estates.

As for the stadium, I went there once for a basketball match. The seats were concrete steps that ringed the court. The roof reminded me of the old hawker centres where the supports were steel girdles and thin. The place didn't look very much like an international venue, more like a club venue for boxing or badminton.

In the 50s and 60s, Gay World was known as Happy World. It was renamed in 1966. The place seemed plaqued by fires and one time, I remember cycling with my buddies to go look-see at what the fuss was all about after hearing sirens blare along main Geylang Road. The rumor was that it was started by gangsters. As a kid, I was told gangsters resided mostly in Lor 23 along Sims Avenue, not far from where I lived, actually.

When we moved from Geylang to Rangoon Road, I was already in P6 and took public bus to school. Rangoon Road was an offshoot of Serangoon Road and my way home meant alighting outside of New World along Jalan Besar and walking through its grounds. Then I would cross Serangoon Road and Race Course Road and walk along Sing Avenue before hitting home. The houses and backlanes reminded me of Geylang. It was a nice, quiet neighbourhood.

I could use Kitchener Road but hey, walking through New World was much more fun. Actually by then, New World was already in decline and the only place still open for business was an electronics arcade parlour that played 10-/20-cent games. There was also an outdoor shooting gallery that offered shots at glass bottles.

I would usually linger at the amusement centre and use up my leftover pocket money for a game of pinball, space invaders, or a bit of helicopter flying. That last activity refers to a small metallic helicopter in a clear glass cabinet, all table top. Connected to the centre by a rod, you fly the helicopter via two joysticks - one for speed, another for direction. It had realistic sound and you could land on spots that lighted up. Decades later I would find the same toy at Toys R Us. But instead of a cabinet, this time you play the helicopter on the ground over a large plastic city map. It also came with cardboard that folded into city buildings. The mechanisms of this helicopter were all the same. Boy, did it bring back those New World arcade memories!

If I was not playing at the arcade, I would go shoot bottles at the outdoor shooting gallery. Its target bottles were all strung up on strings, five to six on each one. The rifles used then were compressed-air ones supplied by a cable. The bullets were not of the pellet sort but long and compacted into a thin tube that loaded like normal ammunition. That was the only time I encountered a rifle like that. The lady who operated the stall was quite nice and would sometimes offer me extra ammunition for free. The rifle was rather heavy for a boy my age though.

At times, New World at night would turn into a pasar malam or night market. I remember buying my first and only Elvis Presley vinyl record there. My mom called him "mau wong" or The King of Cats because he always acted cool. She also liked Russ Hamilton. (We kids all learnt to sing "Oh yes, we will make love" quite loudly without realising what it meant. Or chorus "I'll buy you the moon" from that song Wedding Ring. There was also the mistakable voice of Skeeter Davis, etc., etc. They all ring loud and clear in that ancient jukebox in my head.

We stayed in Rangoon Road for a year before moving far, far away. I was sad to never have to traipsed through New World again. Its leftover amusement businesses did just that: Help a kid relax from taxing school work for one afternoon. I think I did good in my PSLE because of that. The same can be said for Gay World although it was more famous for its cabaret shows (famous HK singer Sun Ma Jai performed there in 1963 according to my mom) and Eng Wah cinema. I probably would have gone to Gay World more often had it been on my side of the street (separated by the busy main Geylang Road). But those few trips there with my family were truly special and wonderfully gay and happy moments.

Next story: Reel Surprises
Posted by TC Lai at 10:05 PM