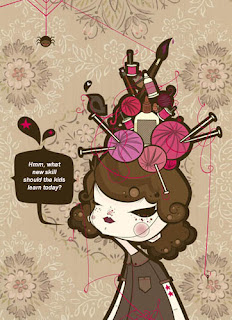 One of my favourite classes in Mattar Primary School was Art class. We had this petite Chinese lady (a Chan, Lee?) who was very open in the way she taught art. It did not matter whether you were a boy or girl - everybody did what was taught. And so I learnt how to sew, knit, embroider, even crochet. Since then, I've always been glad that I was given the opportunity to learn these seemingly unmanly skills. If not for her, when would I ever get the chance learn to do all these? Knit a pair of baby booties for my first born? Nah, I don't think so. I think my in-laws would look at me funny.

This art teacher also taught us loads of other stuff. We made floor mats out of plastic matting and raffia string. We learnt to draw portraits accurately using the grid reduction/enlargement system. I produced very life-like images of QE II and Lee Kuan Yew (our then prime minister) with this method - impressive results for a 12-year old!. At that time, we were very interested in collecting stamps and quite a few in my collection bore the British royal mark and their images. But in the end, I think I took an image of the Queen from a magazine as reference.... Crown, jewels, everything!

We played around with paint quite often. Real household paints needing turpentine to wash off. We would drip-dress the insides of bottles and jars to make colorful vases out of them.

In another project we would first cover a piece of drawing paper with starch and then sprinkle paint over it by flicking the  bristles of a toothbrush with our thumbs. The paint would hit the starch and spread gently like dye in milk. We could also create twirls by dragging a satay stick through the starch; the whole scene would look like some universe filled with colorful stars and galaxies. I believe these sort of psychedelic patterns were quite popular in the 60s.

One time, we learnt to make use of black to create colour.

Sounds impossible? Actually it is quite easily done! For it to work, you would have to use crayons instead of paint. First, fill square grids on the drawing paper with color. Afterwards, cover the whole thing with black. To create patterns of multicolor, gently scratch on the surface of the blackened drawing paper; the colours beneath will show through. The only problem with this method is that we had to use a lot of black and each box of crayons only came with one. Before long, we wouldn't have enough black for another art project!

Come to think of it, this is how pixels work, turning from black into color.

The knitting was quite unusual but we did it nevertheless, learning to knit scarves. I still remember owning two aluminum knitting needles of the colour gold and twisting wool here and there over the needles like some grandmother from an Enid Blyton story.

Many a times, our projects were preserved and kept for exhibition during school Open Days. A cushion cover embroidered with two chrysanthemums was my contribution at one time. Another time, I sewed together a small stuffed elephant and sold it for $20 - a princely sum then! It came in a kit with different patches of felt. For the wool filling, I recycled stuffing from a bolster. We used real cotton back then.

There were other animal designs too and the kits were quite commonly used in class. I think you can still buy these ready made kits from art-craft stores like Dragon Superstore, which was a very popular destination for sewing/knitting enthusiasts at People's Park Centre.

Another time we were taught to make miniature furniture out of plywood. I sawed and nailed together a dresser with a stool. Despite its small size I managed to equip it with a mirror too. I made it to fit a little doll I had. I have five sisters and I learned to appreciate a pretty doll from them. We also played tea parties together. Well, when you are young, you don't think too much of these parties. And of course, someone had to play the daddy!

I did pamper this doll once when I crocheted a hat and scarf out of red wool for her. Crocheting is such a simple thing to do but doing a big piece required effort.

We also carved vegetables (potatoes/carrots were common) to use as printing blocks. I made a pillow case with a print of trees with them. Soap carving was another thing we did.

I cannot thank this art teacher enough for all the skills I'd learnt from her, especially the sewing bit. It came in useful during National Service. It also came in useful as an innovation aid. So many times if a fabric cannot be glued or stapled, why not try sewing and buttoning instead? To me, surgeons sew, fashion designers sew, so it is no big thing for a guy to learn to sew.

With sewing, I've learnt to make attachments to pouches to hold handphones, torches, etc. I've also used a zipper to organise a pair of Nokia headphones; recycled a side pouch from a disused golf bag as a general carry-all; and done countless repair jobs to pants and shirts. It is really a handy skill!

I wish I knew more about this art teacher of mine. Most of all, I want to thank her for making me learn all these skills with my male and female classmates. It made me realise that such skills are not gender specific from an early age. And that is some very useful 'sex' education!

In the past, when they call a lesson Art & Craft, they do really teach you ART & CRAFT. I wish our educators had continued with the tradition. These days hardly do anything memorable. That the lessons were haphazard and used as a proxy to teach English and Science really dilutes the whole purpose of spending time to appreciate one's handiwork..

Next story: A Gay World