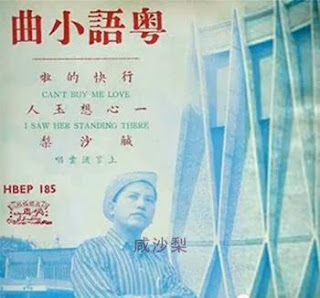 You know how ditties are: once they get inside your head, they will grip never let go. It's what folks these days term an "earworm". I have a ditty which I have been singing since I was five or seven. It's in Cantonese and is about a man who one day, while having satay along Beach Road, thought he saw an old flame and decided to approach her. He then got beaten up by her male companions and even lost his job over the incident. He also recounted how he and this girl named Molly first met and fell in love. The war then came and they lost touch with one another afterwards.

Surprisingly, this ditty did not come from Hong Kong which for a time was very caught up with playful and parody tunes. Cheng Kwan Yin (Min) was the king of this period. He was comparable to the fame of Weird Al Jankovic in the 80s (well, at least in Hong Kong and Southeast Asia).

Cheng's songs were not just about funny lyrics set to a popular tune - they were also about witty conversations between two people... Why Cheng often sang with a partner, usually female. These conversations could be about anything under the sun. A famous one was about getting a treat of roast duck from a friend (which later became a song about fat ladies learning to play football in a hotel and then falling into a river). Or about why a couple should go to a teahouse for tea and a dance. There's even a song about having a salted-egg (ham tan) meal!

These light-hearted tunes first appeared in the late 50s and early 60s and quite a few had Cha-Cha and Ah-Go-Go rhythms with them. For a kid, tunes with such funny lyrics like Body Full of Ants (Cantonese, chow sun ai) or Please Walk Faster (hang fai di ler wei) were hilarious and offered countless hours of priceless repeat singing and play-acting.

I supposed I shouldn't have been surprised to learn that this particular Cantonese ditty in my head all these years was not actually from Hong Kong but Singapore.

When I again set eyes on that album cover (with the National Theatre icon as backdrop no less) after so many decades, I was immediately taken back to those lazy Sunday or Saturday afternoons when my mom or dad would put on a record or two. We had a record player that was set in a cabinet. It also had a built-in radio. (See pics below)

The cabinet was of two levels: Two sliding panels on top, and a pull-down door below. It was longish and low and had those short slim round legs that pointed out and capped with brass - a very typical design feature in those days to protect the wooden legs from mopwater on the floor. It was all very typical '60s design that was part classic, sedustive, and rather full of swanky attitude with its tin-strip trims at the edges. I still am enamoured with such furniture today. They really break the boxy designs of today's unimaginative pieces.

That unforgettable tune I mentioned earlier had a title. It was called Tam Sha Lei, the nickname of the character in the song. The other indelible song in my head was Hawaii Five-O. "Tat tat tat tat da daa...tat tat tat tat tat daa...." As a kid, Jack Lord's suaveness was what I aspired to. Growing up, I never did forget this tune nor Lord's 'curry-puff' hairdo. (Aren't you glad that there is now a brand new Hawaii Five-O series? You can watch it with your grand-kids and when they become old, they can also think back to the time they spent with you humming that irresistible theme music like you did when you were young with your parents!)

Some other records we played frequently were Russ Hamilton's We Will Make Love, Skeeter Davis's End of the World, Elvis Priestly's Blue Hawaii. A Mandarin record that held a special place in our hearts was Xiao Bai Chuan or Little White Boat. It had that classic song Ma Ma Hao or Mother is Best. Like the rest, Xiao Bai Chuan was a 45 rpm record. Only Presley's a 33 rpm because he simply had too many songs.

Quite a few Chinese singers also crossed over to sing in English, at times simply replacing the words in Mandarin with English. One particular creation went like this:

To you I have a thing called Love.
It is always in my heart.
I recall I fell in love when we met I knew...
But why did you keep ignoring me,
Makes me feel that I'm so alone.

My love for you is true that I know,
Please don't make me feel blue.

All pretty flowers bloom in the month of Spring
And by the riverside we see lovers stroll
Under the tree they sat and kissed,
You and I are in the Wonderland of Love.


I think the above two songs worked very well as transplanted creations (not an easy thing to do). People have tried it with Cantonese opera with disastrous results!

There were also a few international English hits that got inside our heads. Two in particular: Butterfly and Will The Circle Be Unbroken. Apparently Butterfly was a song made famous by Danyel Gerard in the 70s but got rewritten and sung by Jim Ed Brown. Here's the one from my childhood:

You are bright as a night full of moon
Butterfly you have left much to soon
You have found you have wings and now you wish to fly
Please don't go, oh please don't say good bye.

Butterfly, my Butterfly now I know you must be free
Butterfly, don't flutter by, stay a little while with me.

In your mind there's someone far away
And you'll miss all the fun if you stay
You believe that love is elsewhere to be found
But you're wrong, it's here, just look around.

Butterfly, my Butterfly now I know you must be free
Butterfly, don't flutter by, stay a little while with me.

Look around, look around and you'll see
Better loved then by me you won't be
And if you fly away you break my heart in two
Please don't go -- I'm so in love with you.

Please wait for me don't fly away...

Popular movies also played a huge part in filling our heads with Pop culture tunes. And they got further ingrained when we performed them for school assembly time. For my school, assembly time was always on a Monday at the start of the week. It is usually peppered with talks either by the principal or teacher or guest (e.g. a talk on health). It was also a time for classes to perform on stage.

One time, when it was my class' turn to perform, we decided to do a rendition of the theme song We May Never Love Like This Again from the  movie Towering Inferno. Well, you can imagine the hoohah that arose when we kids decided to sing such an 'adult' song. But we stuck to our guns and the teacher in charge had no choice but to acquiesce. In any case, we put in many hours of practice and sang our hearts out on that appointed day. Our teachers and fellow students responded enthusiastically. You could say we brought the house down! But thankfully, it was brought down with applause, not fire (haha). It was also quite poignant because it was our last year in school. So, We May Never Love Like This Again was like a farewell tribute to our strict but caring teachers. I remember feeling adult singing that song too, tearing a bit each time we came to the words "Don't stop the flow, we can't let go..."

Come to think of it, the song's lyrics were very apt for the occasion, not so for a burning, flaming building.

I think the reason we chose that song was because the school had brought us to watch that movie during a school cinematic excursion. We didn't go to any of the big fancy cinemas but a makeshift, tentaged one with benches and chairs. There was no aircon... But we didn't really minded. We were just glad that the doors were only flaps. If a fire did break out (like in the movie), we could all run out and not be burnt inside to an agonised crisp. That excursion was one priceless education in fire safety and evacuation!

Our other song choice was Scot McKenzie's San Francisco. "If you are going to San Francisco, be sure to wear some flowers in your hair..."

A teacher also changed The October Cherries' Beautiful Sunday to Beautiful Monday; her goal being that school on Monday was something to look forward to. The lyrics went something like: "Monday morning up with a smile. I think I'll go to school for a while. Hey hey hey, it's a beautiful day! I've got a teacher waiting for me and I know what she's going to say. Hey hey hey, it's a beautiful day!")

Years later, when I started researching these songs of my youth, I came to learn a few things. One, Tam Sha Lei sounded much faster when I heard it as a kid. And when Russ Hamilton sang, "I will buy you the moon", he actually meant he would buy his girl an engagement ring. It's an Irish euphemism.

Like most people, I sang London Bridge Is Falling Down, Sing A Song Of Sixpence, Mary Had A Little Lamp, Ten Little Indians, etc., etc., as a young child. But the little ditty that brought me the most pleasure and enjoyment was Tam Sha Lei. I would often hum it when I needed cheering up like when National Service training got lonely and tough. Or when I needed reminding that I am Cantonese. This was particularly the case after a long period of backpacking in Europe. It could be that the song's humour paralleled mine (I could write funny poems with computer code even). Or it could be that whatever happened, it was Que Sera Sera, what will be, will be - just like what happened to the poor Mr Tam Sha Lei.

Note: By right, Tam Sha Lei should be pronounced as "Ham Sha Lei" - 'ham' being salty in Cantonese. But I've known the song as Tam Sha Lei since childhood, so I am keeping it as such. Next story: Static Baby

In mid 2014, I received a box of records from my brother. I had thought they were lost forever. He was moving house again and decided not to keep them. He then returned them to my mom who knew I wanted to collect them. ;-) The collection contains some of my fave listened to ones, including those Simon Junior songs mentioned above. Songs from his Dream of Spring album and his bilingual ones from the album Fang Xin Jing Lu Shui (Young Woman's Heart Calm Like Water - direct translation). See below for pics! 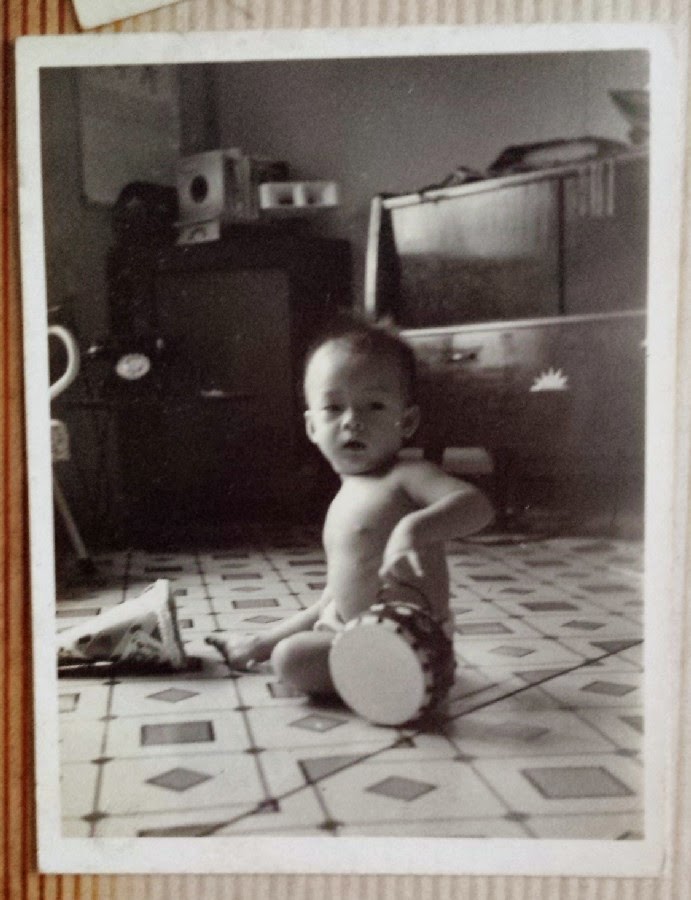 A closer look of the cabinet with records on the left. 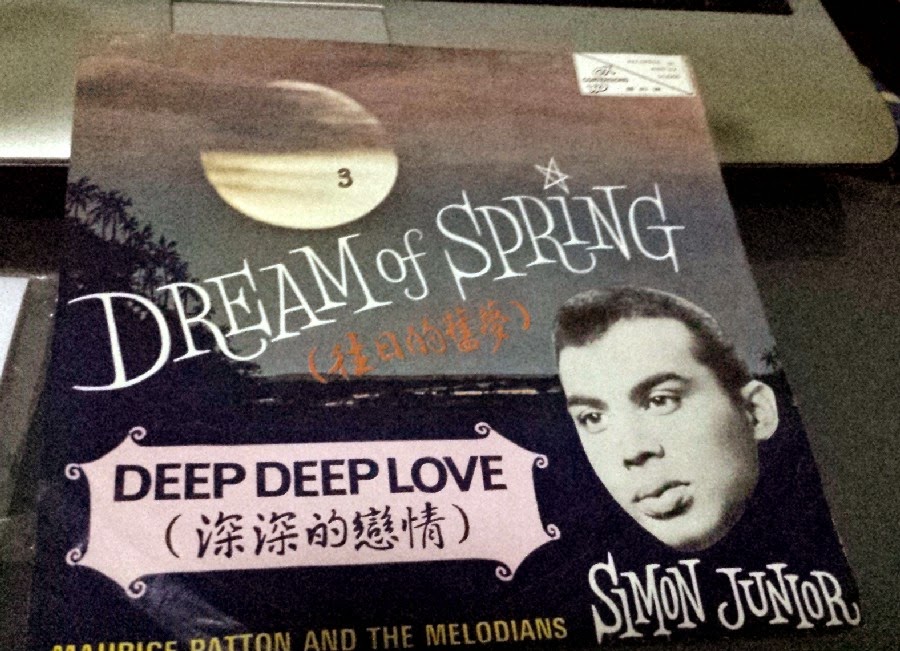 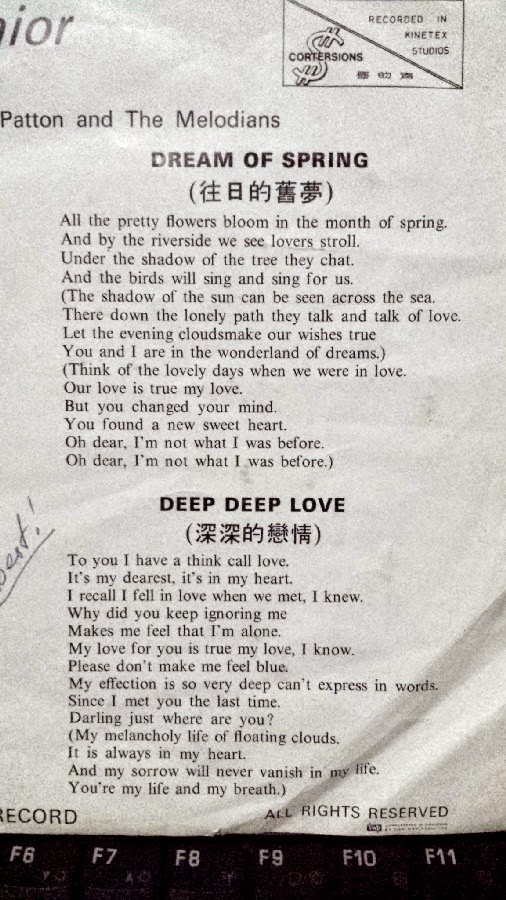 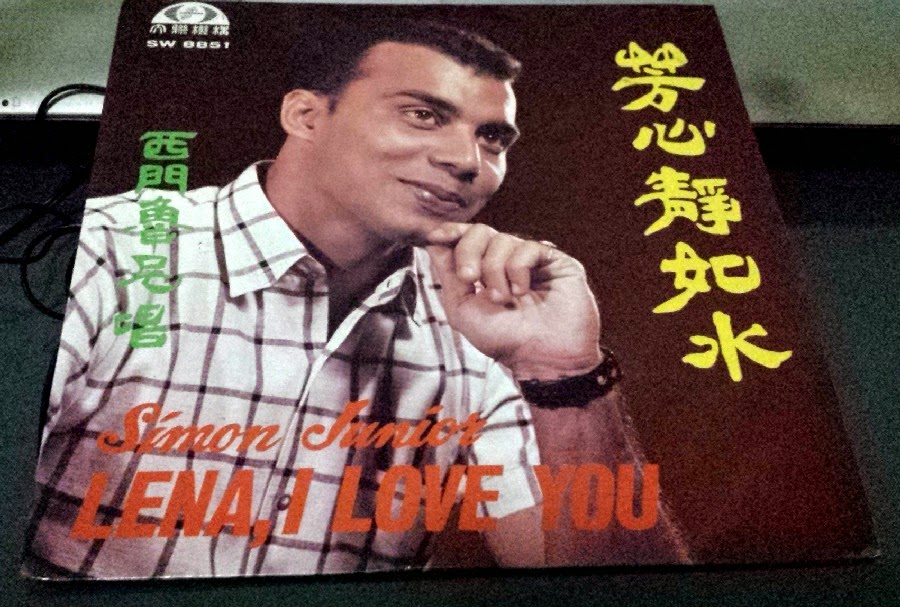 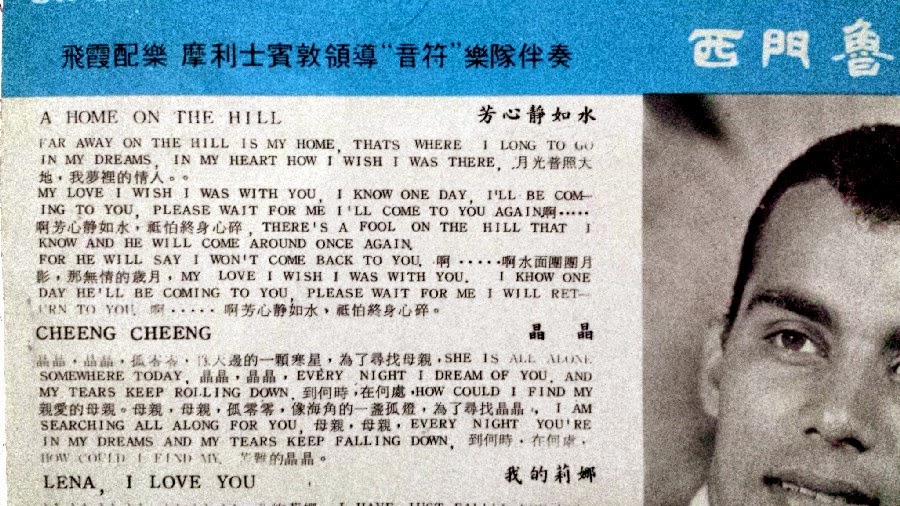 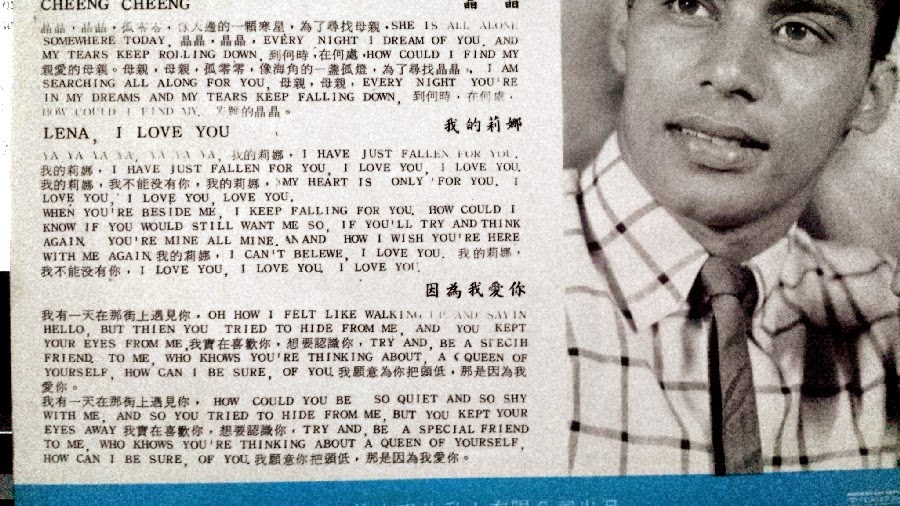 The entire 45 RPM collection (with one strangely playing at 78 RPM). 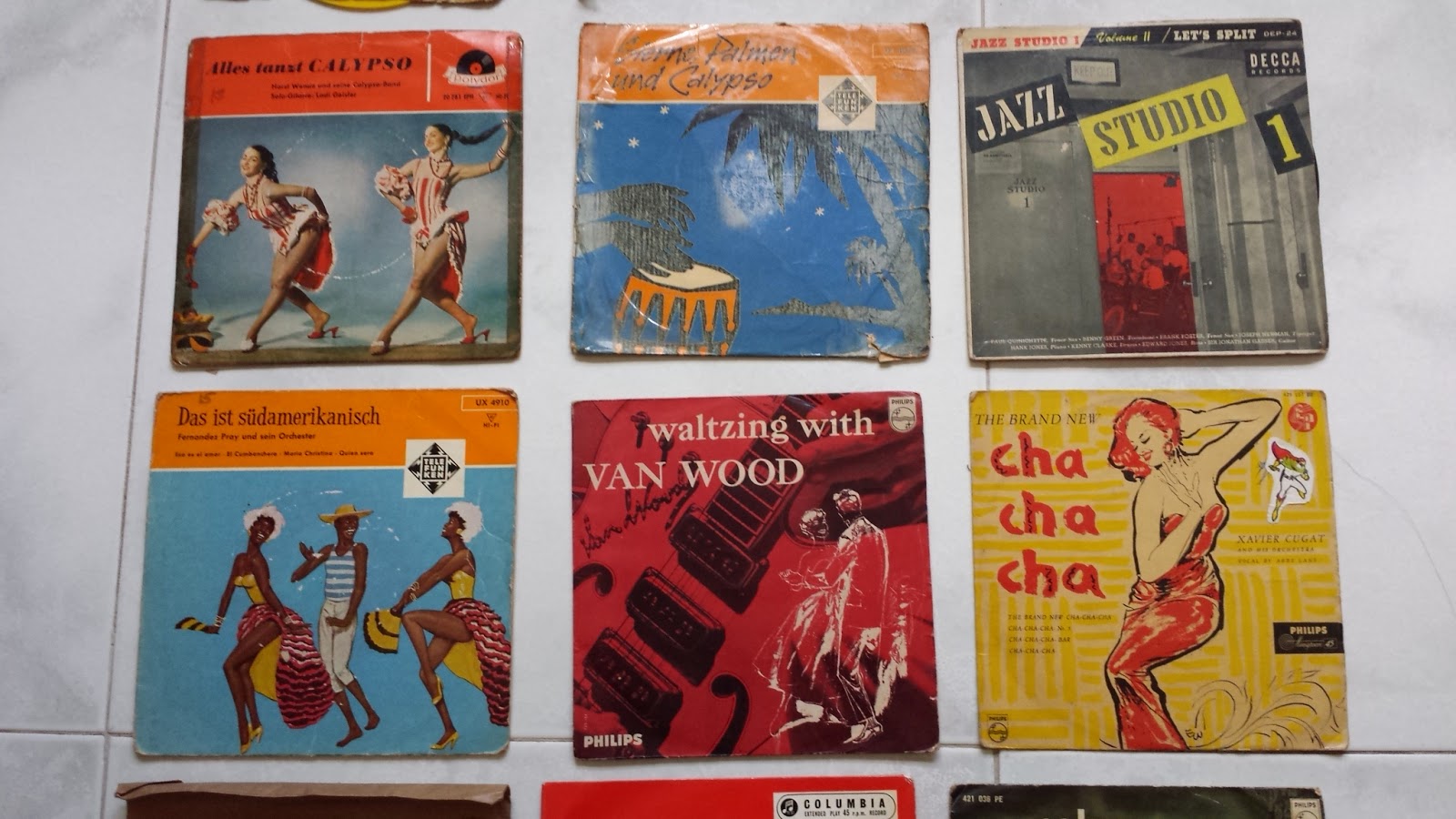 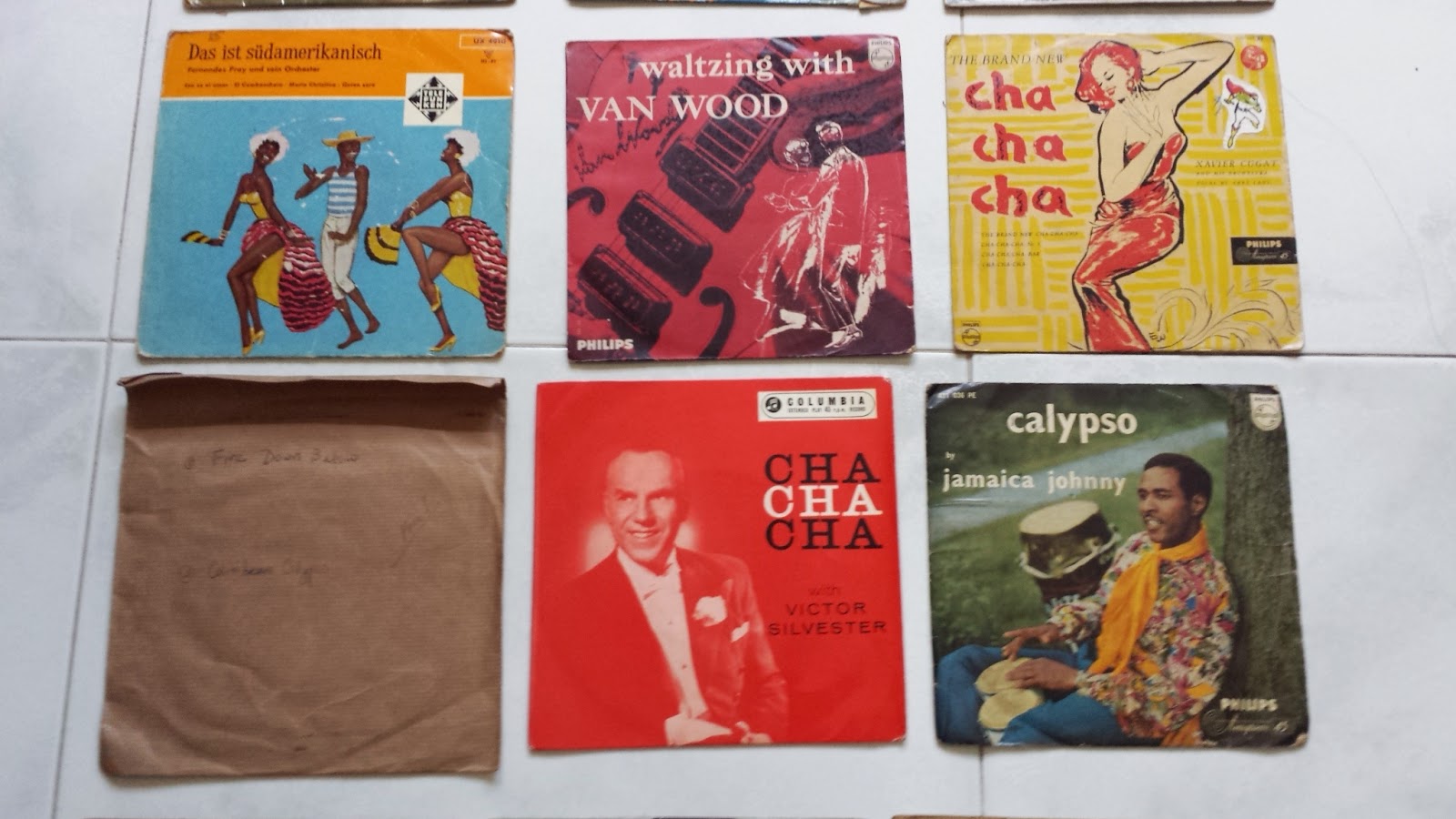 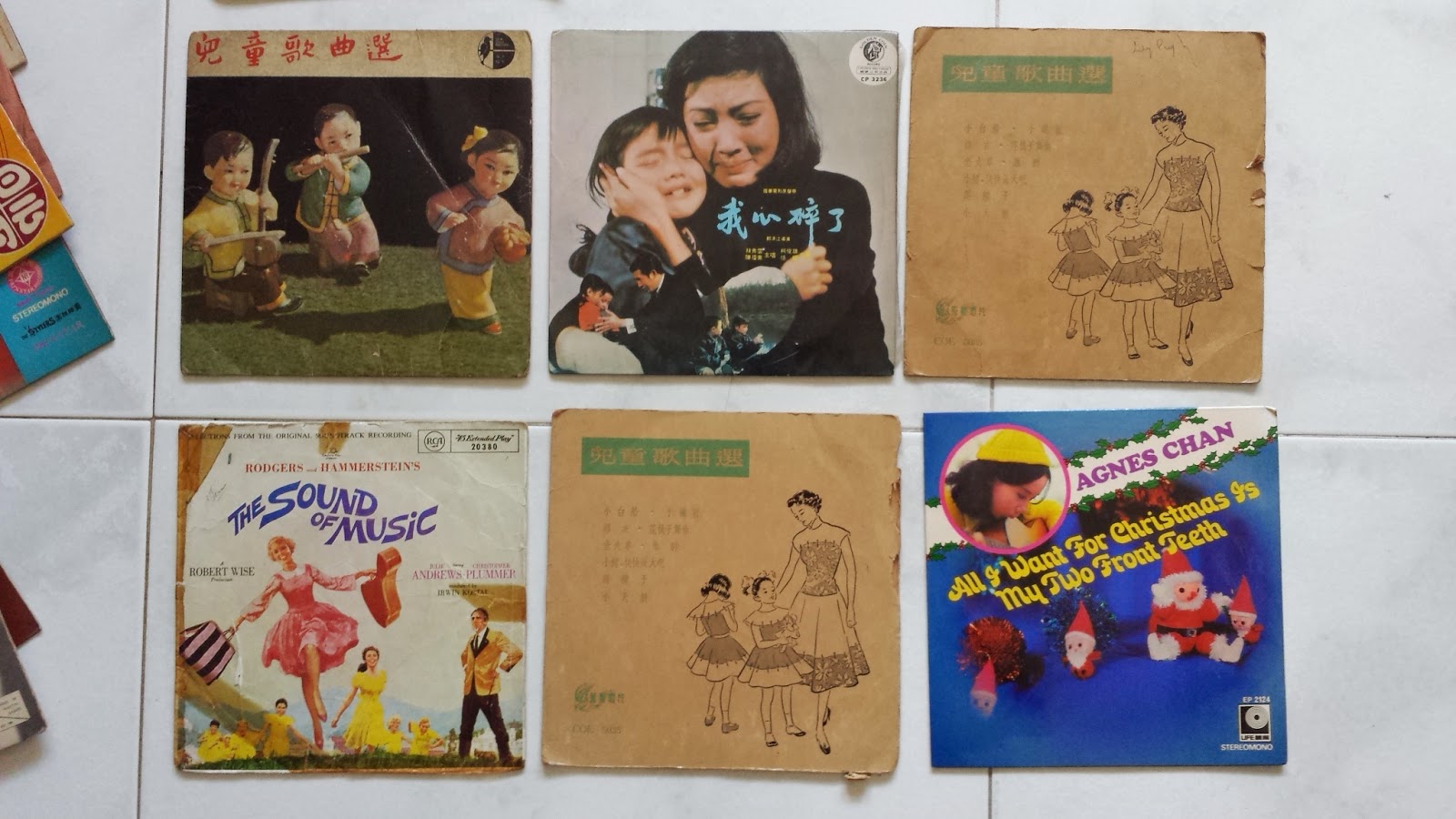 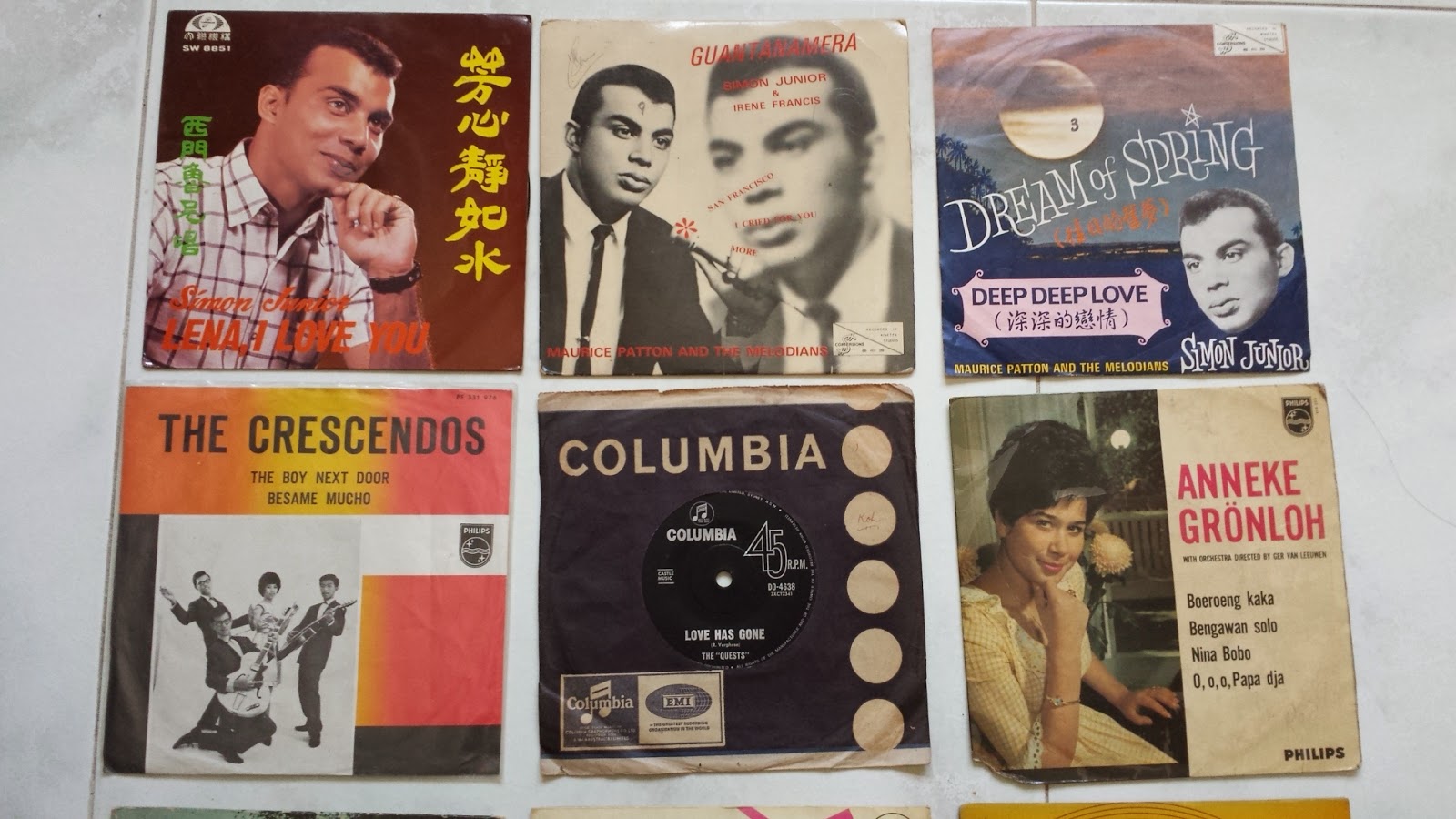 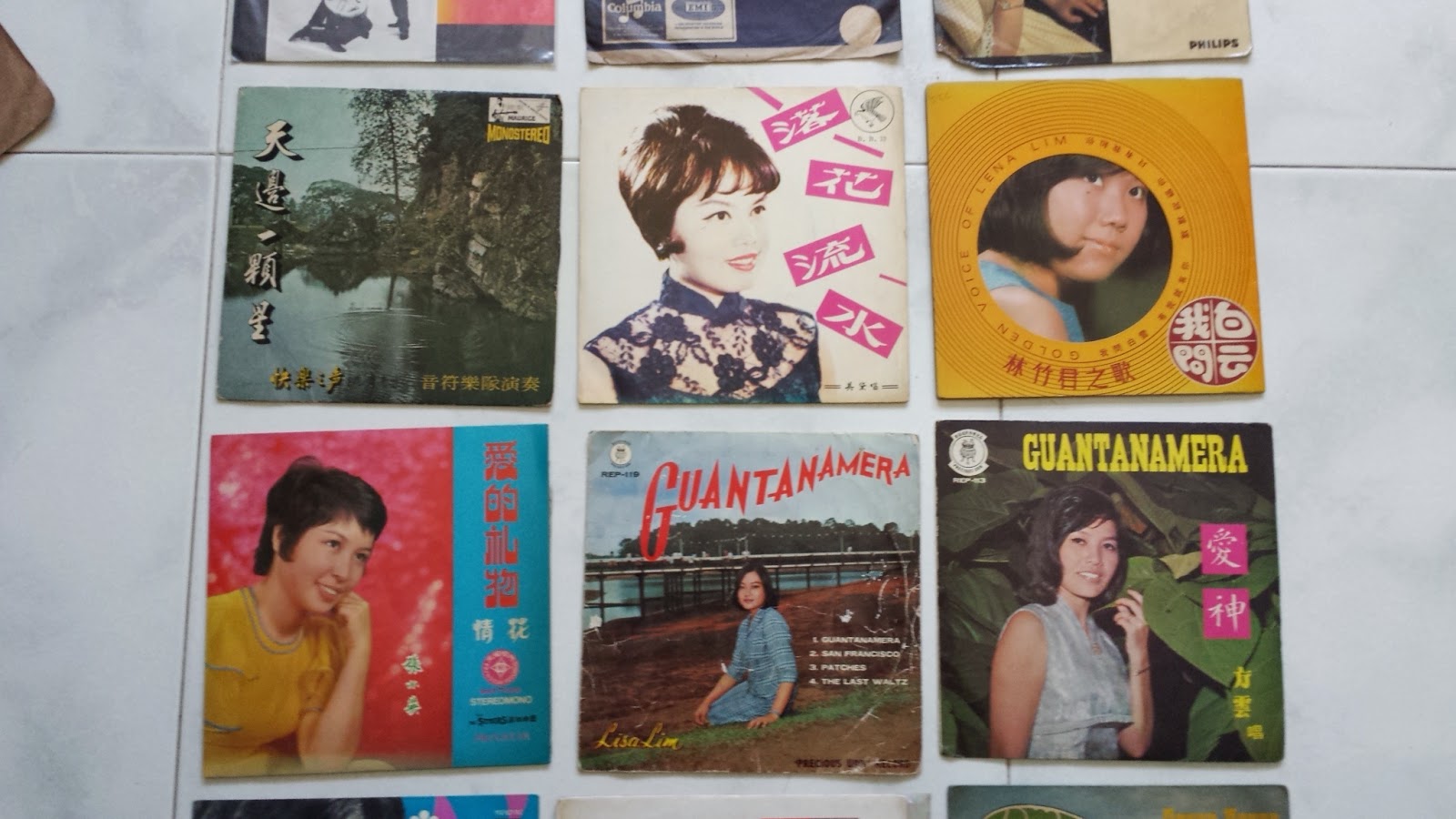 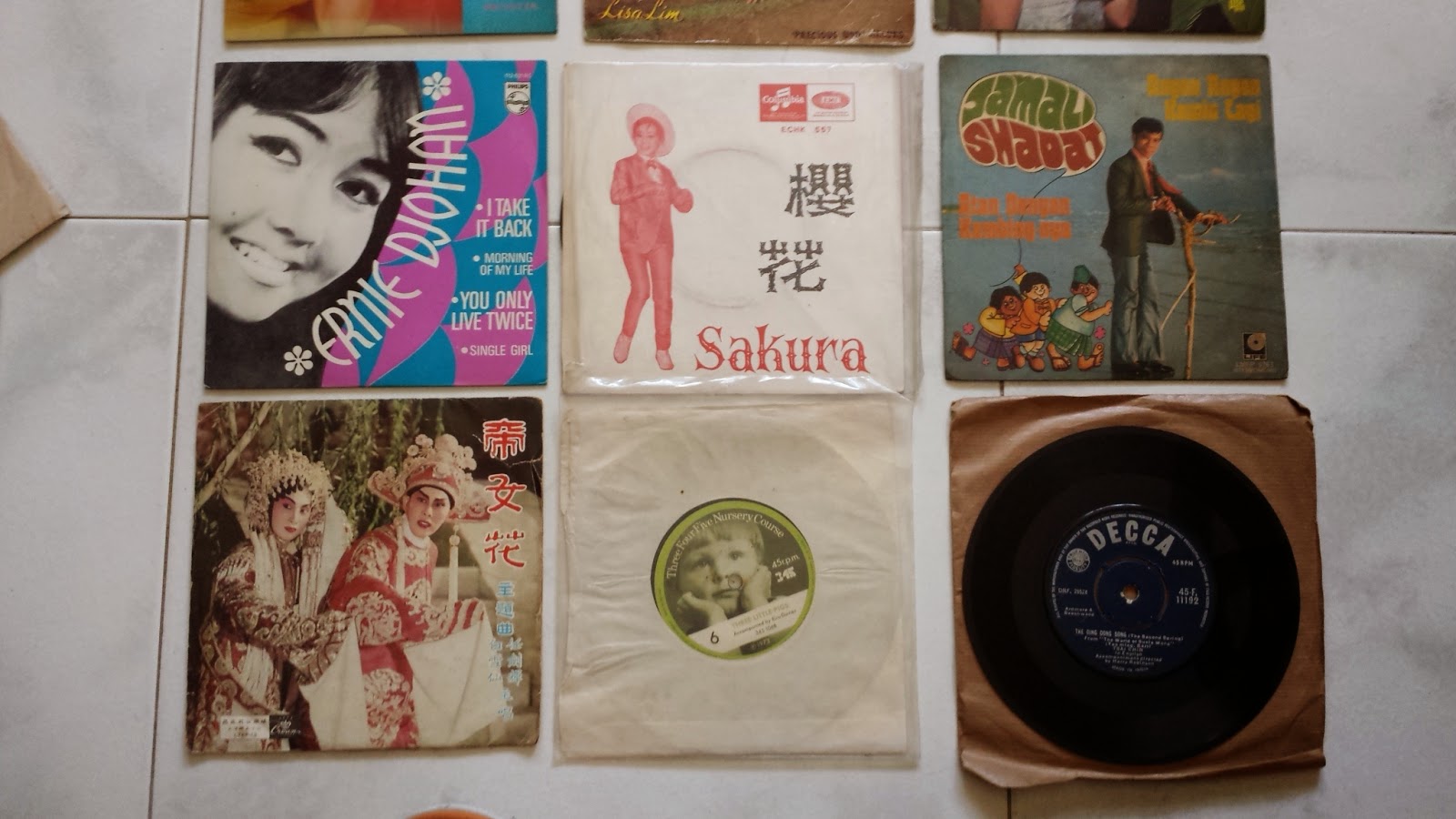 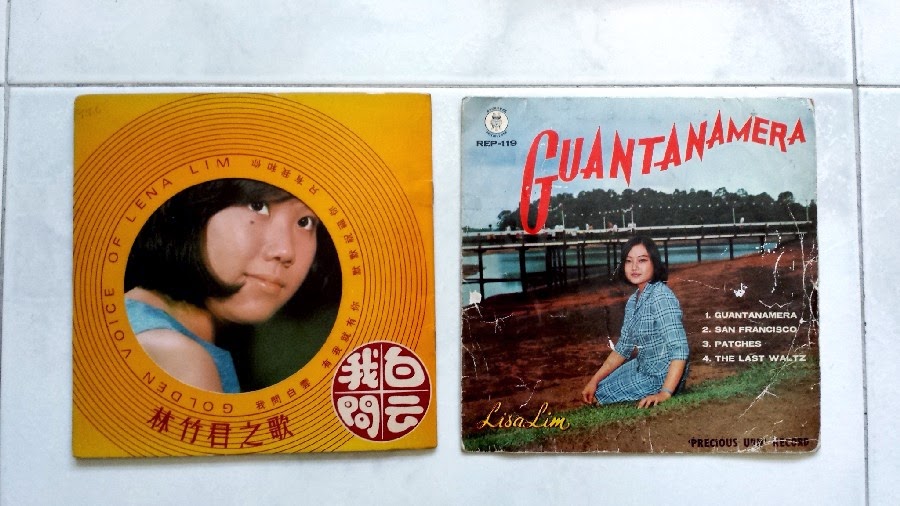 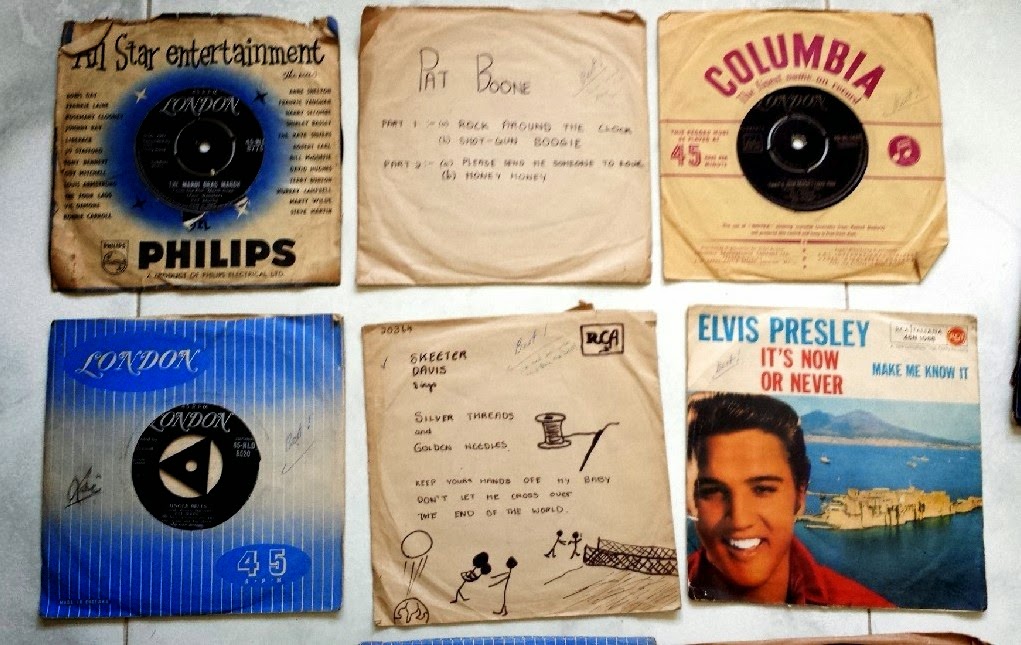 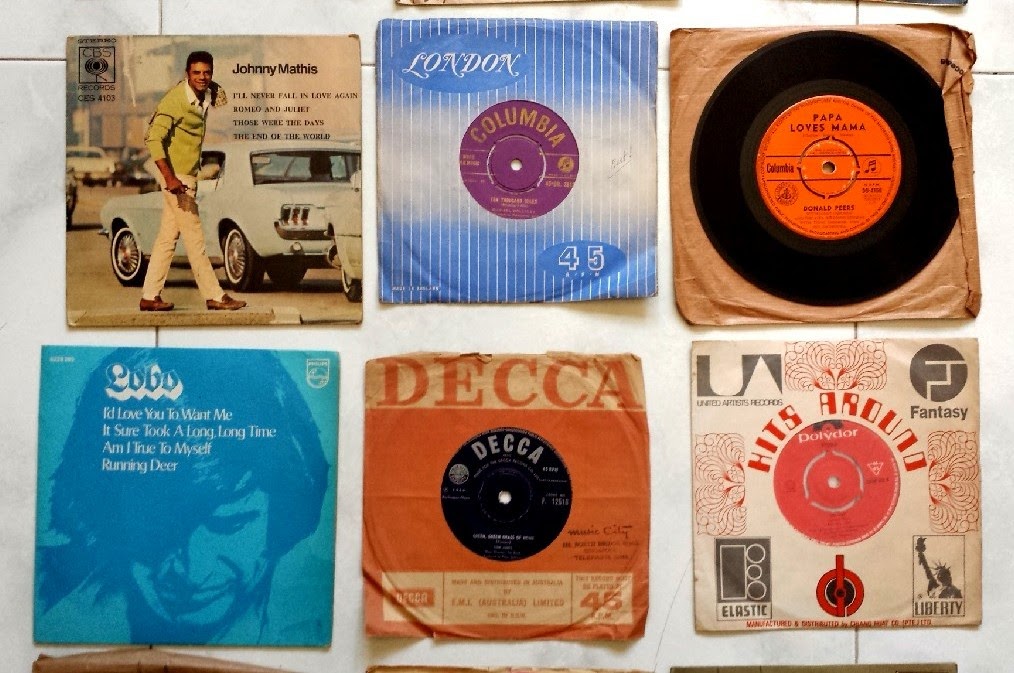 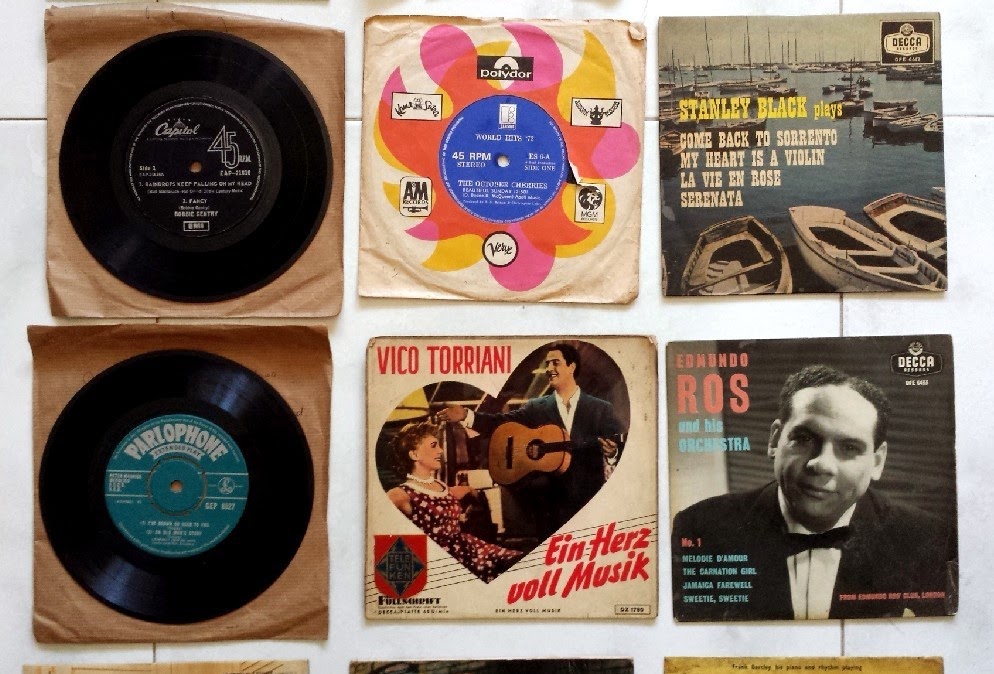 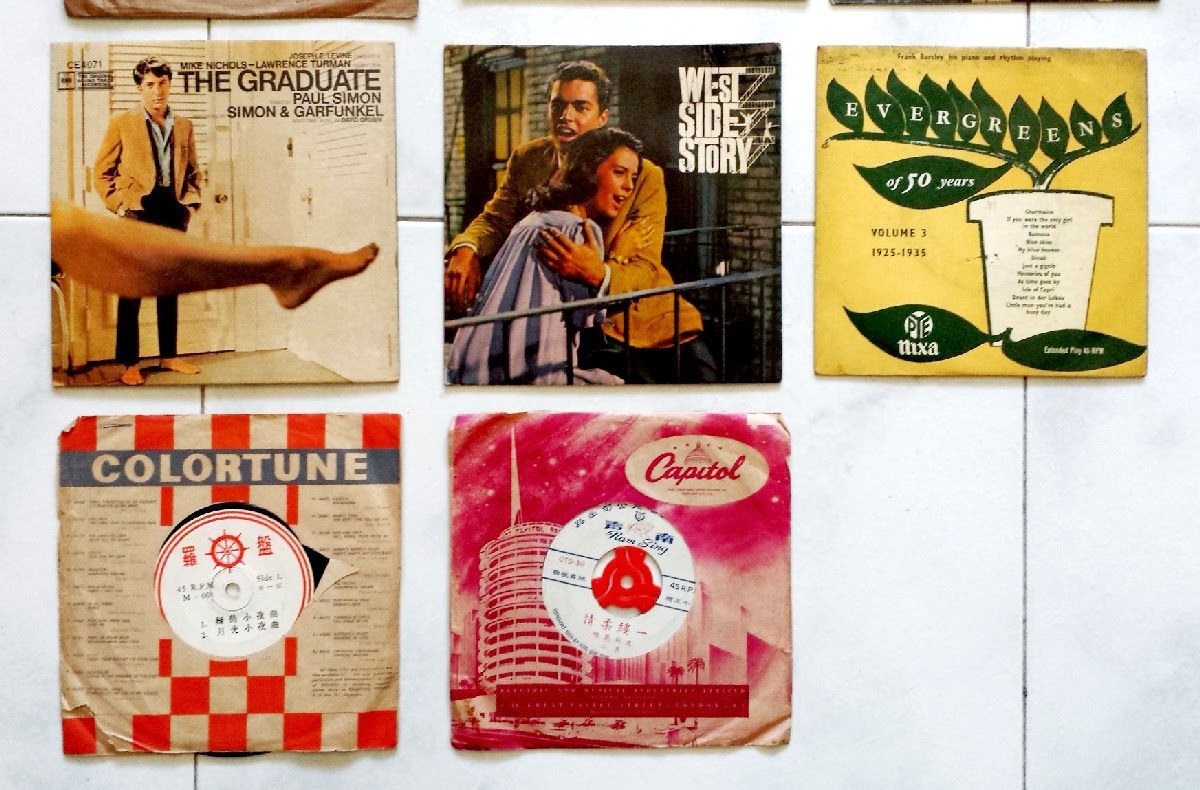