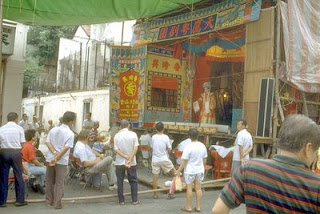 As a Chinese boy, the Seventh Month Ghost Festival played a big part in my childhood. It's a bit like Halloween with kids in the USA, but for us Asians, the ideal of returning spirits is very real and steeped in folklore and religious practice. In Taoist belief, a person's spirit will return a fortnight after death. It will also be 'on vacation' during the Seventh Month as the gates of hell open and get-out-of-jail cards are given. This is why on the 1st of the Seventh Month, we offer prayers, burn incense and lay out a spread of sumptuous food and sweets for the unseen amongst us (why I believe foreigners tend to call it a Hungry Ghost Festival).

During this time, my mom would pray that nothing untoward would happen to us kids. Not all spirits that wander Earth at this time are all kind and well behaved. Some might want to pull you along to hell. Interestingly, there's no mention of heaven. I mean, who are the marshals to keep order (and peace) among the dead?

So, you can understand why parents worry. Like many mothers out there, my mom would warn us not to do a number of things. These are:

1) Do not to go swimming (the watery ghosts will drag you down);
2) Do not to step on joss burn marks by the pavement (bad luck or upset ghosts will haunt you forever);
3) Do not to break any mirrors (or your spirit will be kidnapped by ghosts returning to Hell);

For us boys, an extra caution: Do not go pee anyhow on any old tree you see. And always ask permission or say something like: she suk, ng koi jae loh (literally "Tree Uncle, may I borrow a path" - a polite way to ask for permission to pass your pee.)

During this festival, very few people would move homes too. Freeloader ghosts might just move in and never leave.

Having seen nonchalant ghosts myself (see blog Getting Around), I was never too worried about what or who I might encounter. But with images still fresh from visits to Haw Par Villa, who would want to bump into a yun wan or spirit with a grudge.

Usually before the Hungry Ghosts come a-knocking, my mom would bring us kids to our family medium in Marine Parade. If she couldn't tow us all along (there were seven of us), she would just bring our shirts to get them certified as amulets. The shirts (or blouses) would be chopped with a square red amulet print to protect us from bothersome spirits. There's a print for adults too, as I discovered later. For the Big Folk their amulets would protect them from Little People, the folks who would stab you in the back especially in the office or any business deal!

As a kid, I was never superstitious, so I found all these acts and cautions rather amusing. But in those days, folks like my mom believed in kong tau (voodo curse) - something she thought my dad's first love would often cast on her. That's what she claimed whenever things turned unfortunate. "Must be that wu lei zeng (vixen) casting her kong tow again!" was her typical rant.

My mom might be superstitious but she was not orthodox about it - it didn't interfere with her life. But of course, the rituals remained. The burning of offerings, maintaining an altar, observance of certain festivals, etc, etc. Women in those days often gathered and chatted, sometimes over a table of mahjong. The rituals were what everyone heard about, followed and practiced.

I noticed that Geylang would change character during the Seventh Month festival. And I don't mean by just the street wayangs. The once bustling and commerce-like atmosphere would quiet down and become sombre. The change in atmosphere was very real and palpable.

Everyone changed mode: They burnt incense, tossed joss papers, remembered the dead and feared the un-reincarnated. Yes, there's always talk about spirits who simply refused to go away, find peace or another life. They were supposedly the most troublesome ones.

Sometimes these lonely spirits just wanted to be married off. I am not sure if this was done during the Seventh Month though. My family have had two such weddings. One was for a brother I never had. He was apparently aborted by my mom. This unhappy event weighed on her mind for a long time. This unborn boy would often appear in her dreams. One day all grown up he'd asked my mom for a bride. My mom duly obliged. A matchmaker was found, a match made, and the ceremony conducted. Paper everything was created: the bride and groom, the house that they are to live in, the car, shoes, clothes... everything, was arranged, blessed and then burnt, creating a giant inferno. Looking at the flames, you cannot help but cry that someone's heartache had finally diminished a little, especially if it was your mom's.

For us kids, life might be a little restrictive during the Seventh Month, but we had street wayangs to look forward to. In Geylang, there were as many temples as lorongs, so there would be a number of street wayangs financed and set up. Ours in Lor 17 was a big affair, perhaps due to the many businesses in the area. If you ran a business, you would want to appease the unworldly spirits. It's a big do with these dollar-sign ($$$) folks even today.

We often looked to the street wayangs with great excitement, especially soon after sighting men unload poles that would form the frame of the wayang stage.

The stage was often elevated to a height of 1.6m, so the audience below can have a good view of the action on stage. We kids liked to weave in and out from under the stage. We also liked to peep in through the planks to see what was going on backstage, especially the closed off areas. Often times, the backstage was not covered fully (probably for ventilation) and we could observe how the troupe went about its preparations for their nightly performances. A noisy and smelly generator would chug nearby providing electricity while at the same time spewing out obnoxious exhaust.

I particularly enjoyed watching the stagehands work the mechanics of the stage, like how the scene changes took place and who was doing what. I noticed that stage hands would often play the minor roles in the wayangs as well. They would be the servants, horsemen or foot soldier.

People who watched the wayang often brought their own stools.

The opera itself was often mesmerising: The bright lights, glittering costumes and garish make-up. The fa dan (lead actress) would often receive the best get-up and do. Their long pointy sideburns always intrigued me for some reason. The music was often loud because of the gongs, cymbals and the rather grating erhu. The scenes that often got us kids excited were the fighting ones with acrobatics and tumbling. Also the way the warriors fought with their spears, twirling each other around, their insignia flags swishing about on their backs.

The wayang stage itself spanned across the lorong and often rubbed shoulders with the 2nd storey apartments. I think it must have been pretty damn loud to stay in them when the wayang was in full swing. We were just glad that it was not our apartment! In any case, we were hardly at home as there would be plenty of things to eat and do.

All that happened in front of the wayang. In our lorong, there would be foodstalls, snack stands, dessert stalls, drink stalls, scoop ice cream tricycles and a one-of-a-kind moving picture cart.

It was a time for neighbours to mingle, sit, chat and make-merry. The lorong would be closed so it became like a neighbourhood private-do.

That moving picture cart was a favourite of mine and is actually a movie house on wheels. You pay like 10 cents to watch a short clip of film through a pair of spy holes. The film played from a projector and was often a silent film featuring Charlie Chaplin and his antics. You would hear the clickety-clack of the projector as the film rolled. Sometimes the film ended early and more money had to be paid.

We would often eat at the dessert stall. The deserts would be steaming in big, yellow enamel basins. My favourite was red bean soup and luk mei (Six Flavours - the original name of the present day cheng tern). In those days, it was served hot and you could sit on wooden stools to eat on the spot.

One drink stall that was often a fixture there and at pasar malams (night markets) sold the so-called Bird's Nest drink. In actuality, the bird nest was not the real thing but some stringy imitation agar agar (dessert jelly). You can find an example of this drink stall at the current Singapore Food Trail foodcourt at the Singapore Flyer. Or at the pasar malam opposite Admiralty MRT station. That one is pretty historical, manned by grandchildren of the original hawker!These 'bird nest' drink stalls are easy to identify. It has still that ubiquitous plastic signboard with the bamboo leaves and flying swallows.

Another thing we liked to eat was a kiam sern ti tidbit called yong maa si (literally goat shit). Of course, it was nothing like that (unlike that expensive Indonesian coffee bean). Yong maa si is actually a raspberry-like preserved fruit. It's smallish (slightly bigger than a pea), has a seed and is dark Ribena in colour. The colour and size is why we call it goat shit. It has a sourly-sweet taste. Because it is a sweetened wet tidbit, we would end up with sticky, grape-purplish fingers after eating. (I think the fruit's proper name is arbutus.)

Yes, the street wayang of yesteryear was nothing like the getais of today; it was strictly opera and opera only. At the time, the stories matched the ones told by Mr Lei Dai Sor on Rediffusion, so my parents (usually my mom) would point out the characters familiar to us.

The stories were nothing like the Indian movies we watched on Sunday. They were often of failed lovers, filial piety, corrupt officials, brave generals and seductive vixens up to no good. Somehow, the characters also liked to hang themselves, drink poisoned wine or jump into wells. Street wayangs were the soap operas of their day. What's not to dislike when you could watch it munching on goat shit and downing bird's nest like 100 Plus?

Afternote: My mom tells me that when she was young, the common practice after laying out the joss sticks, joss candles, food and praying, folks would throw 1-cent and 5-cent coins over the offerings. Kids would often scramble to pick up the coins. "My mom would forbade me to pick them up," she said. "At one time, a girl was injured in the melee after falling on a burning joss candle. Her face got scarred as a result. Maybe that's why the practice stopped."

Next story: Kuching Wonderland
Posted by TC Lai at 5:44 AM