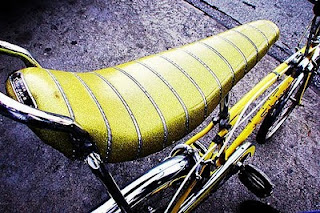 I believe no childhood ever goes by without some sort of trauma or injury. In my case, my trauma came quite often from being caned by my dad and mom. It was quite common back then for children to be caned - slapped even, and not just by parents but teachers as well.

Although my mom and dad were both stern disciplinarians and wielded the cane with equal dexterity, it was my dad who carried it a notch higher. Somehow, the pains from his canings were redder and lasted longer. He also liked to slap us boys up the back of our heads, something my mom detested. What if they become stupid, she reprimanded my dad.

Fortunately, none of these punishments became injurious. And I don't think my brother and I have become stupid. For being naive, there's no cure. For that, I could blame my dad or mom!

Cycling is a great hobby of mine and wherever I moved to, the first thing I would buy is a bicycle. I've never had an accident except that one time when they were burying president Benjamin Sheares. I nearly followed him to the grave! I was riding home after watching his funeral proceedings near Kranji when a pickup came and swiped me from behind. Fortunately, aside from grazes and a sprained back, nothing serious came out of it. I counted myself lucky because we were at a bend. If it had been a straight hit, I would have been in a different place and saying, "Hi Ben Sir, I've always liked that photo of you and your wife hanging in my school's General Office!". My bike wasn't totaled but mangled a little like me. Still, I felt bad because I was riding my brother's favourite bicycle at the time. Looking back, perhaps that "Sheares incident" could be counted as my second biking incident. The first happened while I was out cycling again in the backlanes of Geylang.

When the backlanes of my block became disused sanitation-wise, a stone square plinth was erected at each entrance to prevent cars and other large vehicles from driving in. The plinth, like many others, was pointy at the top. It was about a metre high and flanked by two knee-high, short stone walls that prevented people from falling into the drains beside it. People often treated these low stone walls as seats. My elder sister did; I wished she hadn't. The material of the plinth was made of some rough sandy material that was epoxied together. I think that made my injury worse. (Epoxied sand is making comeback as a flooring. It's almost 1/3 the cost of most flooring types!)

That fateful day I was cycling into the lane and she was sitting there with her skate scooter stretched out. (I use the term 'skate scooter' - a modern term. But I think you know what I mean. The type of scooter popular back than was a three-wheeled type made from iron.) For some reason, instead of pulling it out of the way, my sister pushed her scooter out as I was passing her. This made me fly out of my bike to land squarely on the plinth. My chin split and blood poured out.

There was a frantic shout towards my house above for my mom to come quickly. I knew my jaw hurt but I didn't know what the fuss was all about. Only after my mom came and cupped my chin in her handkerchief that I then realised the seriousness of it all: Her hanky was soaked in blood. As she and my dad escorted me back, I kept wondering if I would spill out even more blood. I also wondered rather stupidly about the spiders in that staircase landing.

For some reason, we did not end up at Phang Clinic, whose physician was our family's adopted doctor. I ended up at the dentist's. I think my parents thought I might have had some teeth or jaw broken.

Fortunately, there was none of that. I suffered a big gash on my chin which surprisingly did not require any stitching. The doctor simply put a plaster on and sent me home. A plaster? I was quite indignant after losing all that blood!

Later I would learn that he had used a special kind of surgical tape, something doctors use even today in lieu of stitching. It aids in recovery and leaves a smaller scar. I felt better after that that the doctor had used something new and advanced. It was kind of sci-fi-ey special. Because the wound healed faster, I didn't have to wear that silly bandage under my chin for very long. It was inconvenient and rather embarrassing. I have had enough of aunties rubbing my hair going "Oh, you poor thang!"

Another serious injury occurred while me and my buddies were out playing football in a neighbourhood school field (Geylang English Primary). The ball had rolled to one big tree and rested there. I ran over and decided to give it a big whack to send it back to the middle of the field. A BIG WHACK. I imagined the ball sailing high, glorious in the sun, people cheering ecstatically. But that beautiful playback stopped abruptly as I crumpled to the ground clutching my foot going "Ow, ow, ow!" I had whacked not the ball but a good part of a giant tree root!

Needless to say, that big toe became sorely bruised. It turned ugly and the nail eventually dropped off. Looking at the now nail-less, blue and black toe, I worried about gangrene. But my toe still had sensitivity, so I just let it heal. Before long I was back at football once more. As an active kid, you sometimes just let these things slide off your back like water on oil.

Another foot injury happened to my friend Meng in that same football field. This time, it was more serious. He had stepped on a piece of broken glass and the sole of his foot was cut wide open. We must have been older then because we did not panic. We bandaged it up as best as we could with our hankherchiefs (isn't it great we got handkerchiefs back then?) and then rushed him on bicycle back home. Fortunately, it was but only two lorongs away. We helped him up the stairs and handed him over to his family. They were quite calm about it and did not scold either of us kids (which was a relief!) I remember his family drove a Ford Escort (the one that looks like a coupe), so he must have gotten to the hospital real quick. The car was sky blue. His family was into garment making and when you visited him, you could always hear electric sewing machines whirring.

This football field we always played at belonged to a primary school. It's rather quaint in that it consisted mostly of single storey classrooms made of slatted wood siding and had glass louvered windows. I am not sure if there are many of such schools left still. It was an English school for a long time and then became a Malay sekolah. It's between Lor 21 and Lor 23 and sandwiched by Sims Avenue and Geylang Road. It is still there but the premises have already been taken over by social enterprises (a thrift shop) and auto companies. In the field now stand a huge hangar. That's rather sad, I think. It has completely changed the character of the place. I hope they don't ruin it further beyond recognition.

They say accidents maketh a man stronger. I think the same applies to boys.

We were out again at that field playing, this time with our bikes. We had made an earth ramp and were trying to outdo each another by jumping higher and further. When my turn came, I took off quite nicely but landed quite hard. So hard that it positively bent the banana seat of my bike. Needless to say, the part that did the bending was pretty sore. I thought my bollocks had burst! Would my non-existent hernia come back? So, it was another round of worry about medical conditions. I think I had more worry keeping it from my mom and dad. Who'd want another round of caning?

When you get hit there (the manly regions, so to speak) it is quite difficult to walk straight. Somehow, I even managed that and mom and dad never found out about my ambitions to become a daredevil. But there was no fooling my mom when I got bit by an Alsatian dog. I had to let on eventually because I was worried sick about becoming a frothing, water-hating rabid zombie. Besides the chin scar, the thickened toe nail (that's how they will grow back) and that pair of puncture holes on my butt, I don't have any more bodily souvenirs from my childhood. Maybe that is for the best!

Next story: Being Miss Muffet
Posted by TC Lai at 8:05 PM