A Start in Badminton 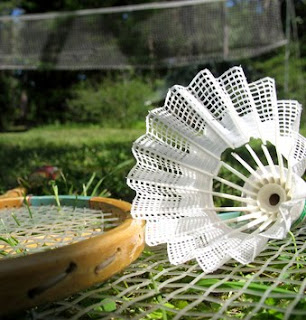 As a young man, I played badminton pretty well. Well enough to qualify as a national player judging by the competitive matches I used to play against Malaysian and Indonesian state players. But because I had moved to the north of Singapore, coping with the resultant long travel to town and Pre-U studies meant joining a hectic national training scheme (such as the F&N one) was out of the question. (This is an example how a decision to relocate to ulu-dom can affect a person's interests and sporting progress!) But even with all the talent in the world, if it hadn't been for my Geylang neighbour, I would only be good at swatting flies.

My neighbour lived downstairs in that shop that distributed those Ken-Ken cuttlefish snacks. He was one of the sons of the owner. I think he was 15 or something but in our youthful eyes he appeared much older. He was strong and well toned. Each day, I would find him loading the many bundles of goods into those signature VW vans (with the giant cuttlefish signs) that the family owned. The vans were always parked outside the shop along the road at the end of business day.

This young man had younger siblings and all the kids in the neighbourhood loved going to their place for birthday parties. Being in the snack business, there were for sure a variety of snacks and sweets. And despite being busy, they were a very open and friendly family and I recall the many times I would pop into to their shop to play. Their shop was lined with several large shelving rows of cubicle boxes painted green that reached into the ceiling. Into them went giant bags of snacks and sweets. Tall bamboo ladders were used to reach them and I especially loved to climb up on them to hear them creak.

I don't remember the name of this young man but his badminton skills must have been quite considerable at the time. I recall he was once featured in a newspaper competing in a tournament. When we saw that pix, we were all impressed and asked him to teach us the sport. He did not hesitate and proceeded to set up a badminton court outside his home in our common backlane. Our backlane was not as wide as a normal badminton court but that did not matter - we just included the side drains as the court double tramlines. We later drew visible lines over the area with pale blue paint. It was quite fun working together as we kids pitched in. To hold the net, this young man knocked a couple of nails into the opposing walls. When this was done, we were all set to play.

Our parents bought us kids racquets and a net from that Chinese Sin Wah Emporium in nearby Gay World. The net was of dark brown cotton strings topped with a white cloth trim; it was made in China. I think the brand was either Aeroplane or Double Happiness - the same fellas who made those ping-pong bats (and nets).

Whenever we had time, we would go down to our self-made backlane badminton court to play.

I remember this young man teaching us how to serve, hit the shuttlecock, and smash. My brother who is four years older, learnt quickly. He proceeded to play for our primary school team. I wasn't far behind and became the school's youngest member even though at P2, I was deemed too young to compete. Nevertheless, I would follow them to competitions just for the experience.

I remember one time making my way back from the Singapore Badminton Hall in Guillemard Road on my own after a competition. It gave me a sense of accomplishment crossing the unfamiliar lorongs to get back to my home along Sims Avenue. I also saved the 20 cents of bus fare that I usually had to spend.

Around our neighbourhood, we had a bunch of kids who were very interested in badminton, so this young man would come and play with us whenever he could. It was his attitude (a better player taking time to play with novices) that inspired me to train others later. The racket we used then were the wooden sort and I remember mine as having a wooden shaft as well. It was decorated with decals that later peeled. One time I was so excited to play that I didn't bother to go home to get my racquet. Instead, I shouted up to my house on the third floor for someone to throw the racquet down. I'll catch it, I said. Someone did throw the racquet down. It bounced off the floor once before I managed to catch it. I then checked. No cracks. Great!

My father later bought my brother a Yonex racquet. Amazingly, Yonex is still a popular brand today. That first Yonex racquet my brother owned had a wooden frame and a steel shaft - an innovation at the time. I believe it was the B-9100 model, brown with the old logo still. In those days, racquets like these had to be kept in a wooden press to keep them from warping. We sometimes had to clean the strings too as playing in that backlane court meant having shuttles fall into dirty drains. We often had to knock them on the floor first to get the black, icky muck off!

As we got older and busier at school, we saw less of this young man. I wished I remembered his name or that he was around when I last visited Geylang. In badminton I went on to represent my junior college in singles, something I think he would have been very proud of. And we almost won the National Championships if not for a slight technical hiccup. But that's another story!

Previous story: A Firecracker Fight; Next story: Errands
Posted by TC Lai at 5:24 AM