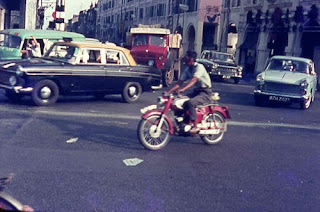 My earliest memories of a car ride is no good. For some reason, I tended to get car sick. This went on till I was 10. We had a taxi uncle who lived in our terrace row, so we often enlisted his yellow top cab service. He sometimes took us to school, sometimes to North/South Bridge Road. He got so familiar that we even made up a ditty about him, or rather my aunt and mother did. I'm afraid it's rather X-rated, and it does sound better in Cantonese. I think it was because folks found him a little talkative and ham sup (lecherous).