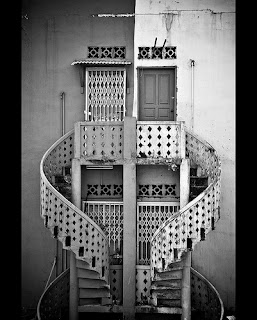 Sometimes the design of the house you live in can give you some twists and surprises.

My home in Geylang was a third floor apartment in a terrace block along Sims Avenue. It had a living room, a smaller dining area and a longish kitchen that was opened on one side. This airy kitchen faced a neighbor who had the same but mirrored floor plan, hence you could look into their home and see what they are up to and vice-versa. Such an open kitchen is of course at the mercy of inclement weather, so many families back then would install bamboo blinds. These blinds would be let down in the evenings as night drew near.

The open kitchens were not far apart. You could actually have a conversation with your opposite neighbor, which my mom often did, her voice echoing in the space in-between. Usually the conversation was nothing too personal: how the children were doing, what they were up to, etc., and who just came to visit. Friendly neighbors often strung up a pulley basket between themselves to exchange stuff or return a favor like sharing sugar or salt.  We did the same with our opposite neighbor via some pulleys and a green nylon rope.

Such neighborliness was also extended to the shop neighbors downstairs. We would call down or they would shout up. This often happened when hawkers dropped by. The food items would be placed in a basket and then hauled up. For a kid, it's a priceless activity. I'd always imagine myself as a pirate or some adventurer pulling up treasure from the deepest oceans or the most cavernous canyons.
Another imagination was as Tarzan bringing up stuff to his tree house. Tarzan was a popular TV action character at the time. We would imitate his crocodile rolling antics with our parent's bolsters and stab them with our imaginary daggers.

But having an open kitchen can be hazardous. I have two younger siblings and mom would always remind me to watch them so they didn't fall over the ledge. Our aquarium fishes were not so lucky. We had a large tank on the parapet (supported by angle irons) into which we kept popular pet fishes like swordtails, guppies, algae suckers and angel fishes. We also had two lovely catfish-like fellas. One day, one of them got so stressed by the pigeons that visit that it actually leapt out of the tank and onto our shop neighbor's zinc rooftop below. This despite us having put up a chicken wire mesh over the tank to protect them.

We could do nothing for the poor fish except watch it die and shrivel up like kiam hur (salted fish) as it lay simmering on the shiny hot zinc roof. To this day, I often wonder why the pigeons never picked that poor fella up. Maybe they felt guilty or no one wanted to take the rap. Sad to say, as our fish collection grew more fish jumped. That patch of the roof became our version of Stephen King's pet semetary.

The backyards of the shops below sometimes had a roof. Some of them, like my Ken-Ken snacks neighbor, had a slide-able one. On good days, they would open it up. On wet days, they would of course have it shut. In this way, they had the use of their backyards 24/7.

I prefer that they remained open because I liked observing their activity from above. It could be because of the toilet at the rear. Many a times I could see the old uncle from the g cheong fun shop below exit the toilet and pull up his draw-strings pants. They were striped white and blue - the kind fashionable with the ah peks in those days. Coming out of the toilet, he often scratched his balls sending me and my sisters into giggles.

The other feature of the house was a spiral staircase that led into a backlane. But before it did, it came into a landing that was also a small room (cellar more like). Sometimes this cellar would be roofed - at times not. It was a common area so how it got transformed depended on what the neighbors agreed upon. Some used it as a storeroom. Ours was only partially covered and so exposed to the elements. The floor was often damp and that resulted in green algae. The algae climbed up the walls as well. It's no wonder that the whole place stank like a filthy fish tank.

Me and my siblings often worried about the spiders, cockroaches and what-nots that lived in the shadows of that dank place. We might run down the stairs but we would always slow down warily just before we reached the bottom landing. We wouldn't want to awaken those nasties behind the staircase and have them crawl out and assault us. Once we reached the last step, we would bolt for the door and out into the back lane. The cellar thus became a kind of boogeyman place.

Going back in was more terrifying, especially after the sun had gone down. The place then became extra dark and menacing. I think we had a few nightmares as a result. But I grew less and less afraid of such neglected places after I moved to Rangoon Road. We stayed in a similar kind of house but my dad had turned the bottom landing area/cellar into an engineering workshop. We also kept dogs there. But because we had neighbors who sold pipes and plumbing equipment, that place got more spiders than we did in Geylang. So, although the landing room was cleaner and brighter, it also harbored nasty surprises. And this time, we lived right above the shop! A few times, we had giant spiders (and I mean GIANT SPIDERS) climb into our house through the similarly open concept kitchen. For a while, my brother and I slept with handkerchiefs over our mouths (for fear that one would climb in while we slept, and nest! Talk about a night of fitful sleep!)

Having a spiral staircase also meant we had staircase cleaning duties. We would regularly wash and brush the stairs and balustrade with those brown bristle brushes made from coconut husk, and sweep the place dry with that short broom made entirely of thin leaf stalks (a sipu lidi, it is called). Made from that useful coconut tree. Adjoining neighbors would clean their section of the staircase.

Because the staircase was spiral, the steps were both narrow and wide. You had to take care where to step. Although we sang a happy tune cleaning it, we also worried about tumbling down and knocking our heads against those sharp, unforgiving concrete edges. Ah, life in that house was indeed fun, engaging and dangerous all at once. Not to mention surprisingly neighbor-friendly too!