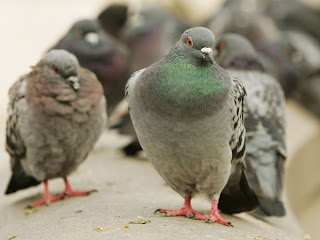 Being born premature made everyone think I was weak. And when they heard I could fit into a shoe box, sighs would follow. For some reason, my mum thought I suffered from hernia too, so a double whammy. This was why much of my childhood then involved a series of traditional soups and medicines to boost my constitution. The most fanciful was "lo fu nai" (Cantonese for tiger's milk). No, it was not tiger's milk per se or my dad would have chucked me out for making the family poor.

Still, the LFN was not cheap. Nor was it easy to come by. In fact, it was darn hard to find. LFN was actually what grew from the ground where tiger milk had dripped. So, do lactating tigers stand around much? Or were the little tiger puppy suckers a slobberly bunch? - Maybe both. It did not help that my testicles remained unmatched (a sure sign of hernia, the current thinking then) so I had this LFN concoction for a while.

One time, it got into my mum's head that pigeon's blood was nutritious, so she sent me upstairs to the rafters to catch one. I was skinny (premature, remember?) so it was unlikely that I would cause the roof to collapse. The roof access was through a square plywood panel in the ceiling. We reached it by stacking a chair on our very solid teak wood dinning table (a longish one that we kids liked to use as a ping-pong table.) The panel lifted easily and I took care to move it aside as quietly as possible. The space up there in the rafters wasn't very dark; sunlight could be seen glaring through the eaves from the far corner showing up a nest and some pigeons nearby. I pulled myself up and then stood on two parallel rafters, careful not to step on any area not supported by a beam. Having adjusted to the light, I could see a pigeon in the nest I saw earlier; I decided to head for it. That same pigeon was probably the one we had heard cooing the other day. (You could always tell by the sounds they made if there were younglings.)

Grabbing the pigeon was surprisingly easy: it did not put up much of a struggle. I had caught butterflies with my bare hands before and that knowledge came in handy. Also, my mom had told me to "just hold on to the wings". So I did, and that was how I walked myself back to the ceiling opening. I must have been about five years old then.

Once back down in the kitchen, my mom slaughtered the bird. She slit its throat and then drained blood into a rice bowl. It was warm, bubbly and rather sticky. In those days, you hardly say no to your parents, especially when they say "This is for your own good!" So I gulped it down. It wasn't too bad really. Maybe I got vampire genes in me! But thankfully (and for the sake of the pigeons in our rafters) that was the first and also the very last time I was asked to do something quite like that.

Note: Recently, I located info about the lo fu nai herb. It's called the Tiger's Milk mushroom and is available especially in Malaysia. It's also called Orang Asli Gold as it was they who discovered the herb (part of the lingzi family). They use it to treat cough, asthma, fever, gastritis, indigestion and food poisoning. Because of its supposed origins (from a drop of tiger milk), the herb is expensive, sold at RM$270 a kg, Dr Mahathir claims the herb cured him of a chronic cough. Next story: Backlane Wu Ladies Related story: A Free Clinic
Posted by TC Lai at 9:31 AM