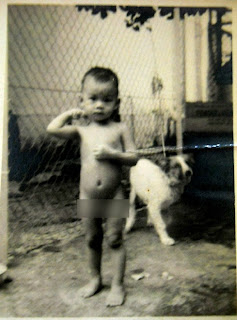 Of the accompanying photo, please focus on the dog and not the 'ahem'.

As a child I enjoyed bathing in the family yard with a hose a lot (not that I'd wanted to do a 'Dances with the Wolves' thing. There wasn't a nearby river to frolic in!) Also back then, parents found it novel to photograph their children in the nude. Perhaps it's something they want to laugh over about in their old age. Or was it a means to extort filial piety later (aka maintenance money)?

This is the only picture I have of me and a pet growing up. He was not actually our pet but some mongrel my mom had adopted and reared in the yard. Like all the dogs we were kind to, he was called Lucky. We were living in Jalan Sayang then (near to the present-day Kembangan MRT station) just before we moved to that place along Sims Avenue, Geylang. The entrance to the area has since been replaced by an MRT pillar. How charming. *Sarcasm

My mom has always believed that it is good fortune to have an animal come look for a home, so we should always do our best to look after it. Often she would use the occasion to buy "sup yi chi"  (Cantonese for a two-digit gambling game) for the luck that the animal would bring.

You can learn many things from a parent; kindness to creatures is just one of them. With my mom, I've known for a long time that she has a knack with animals. They just seem to relate to her well... like how this cat would climb six stories up to her home just to lay on a seat outside her door. Oh, I know this cat wants to get in and be pampered like the rest but cats are like that: jealous and selfish with their own kind. Dogs, on the other hand, would just smell butts and get along.

When I was six or seven my mom bought us kids a rabbit from that lady in Chinatown who skinned snakes and shelled turtles in the street. I was glad then that our rabbit escaped her chopping board. I also learnt the difference between a rabbit and a hare at the time; and it was a hare that we bought. It - a she - was a mixture of brown and grey tones. It lived to a ripe old age. Some of the things that it enjoyed was black coffee and white bread. Because we never liked to cage animals, our pet hare was free to roam about the house. This resulted in the fella chewing up our Japanese slippers (flip-flops) and power cords. The same with our scented erasers that we happened to leave behind after doing homework on the floor.

That our hare liked such things would get my sister scolded by her teacher for spouting nonsense. Rabbits only ate carrots, the teacher said. Back then, teachers were narrow-minded about such things. They were also encouraging like that, perpetuating their limited and oftentimes old-fashioned thinking.

As mentioned, our hare Bumble could roam freely in the house. But my mom liked to keep a clean house, so she had to toilet train the fella somehow. You know what a stink rabbit urine raises... but not so much the shit unless they have diarrhea.

But my mom is good at such things. It didn't take her long to teach the rabbit to use the gutter hole under the kitchen sink as a toilet. Even though I had faith in her, I was actually amazed that my mom succeeded. Nobody at the time had ever heard of a toilet-trained hare before. I was so tickled by this fact that I would tell anybody who cared to listen at school. I wanted my schoolmates to know that it was something possible to achieve!

That episode opened up my imagination to all kinds of animal training. I then tried to train a dragonfly attached to a string. That episode served only to remind me that certain creatures preferred to remain free.

Oh, we certainly were tempted to keep a pet each time an injured sparrow fell on our staircase. But our mom would remind us that sparrows would rather die than be kept hostage in a cage. And so we would nurse it in an open shoe box hoping it would not bite its tongue and die. I guess it is the same with us kids back then. We would rather run about in the backlanes of Geylang than be cooped up in the house. It's a good thing we didn't have computers or iPads then!

But at the end of the day - and like that mongrel - we certainly appreciated going back home to a warm meal and some loving attention. Home is where the heart is. Somehow, we kids and our animal friends both this to be true.

Previous story: Little Giant Me; Next story: Hooray for Sisters
Posted by TC Lai at 9:51 PM