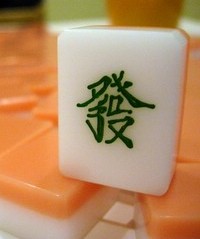 Well, these folks were not too far off in their assumptions.

I learned to play mahjong at a very young age, even before primary school. You can say it was my education in lieu of kindergarten. With so much fun in the back lanes of Geylang, we kids did not have time to go home, let alone attend preschool!

I have six other siblings. We all learned to play mahjong watching my mom move her tiles. She would teach us as we stood beside her during a session. My mom's mahjong sessions were often at a neighbour's house opposite ours (see pix). That neighbour was Ah Lam-soh. (Madam Ah Lam, that is)

From the back circular staircase of our apartment, we could look into her kitchen across a back lane. Their apartment proper faced Lor 17 whilst ours faced Sims Avenue. In Geylang, the back of our houses all emptied into back alleys. We could talk/shout to one another and watch each other's back, so-to-speak. Once we open our back door or roll up that kitchen bamboo blind, we could see and talk to one another. I miss that kind of open-plan interaction.

Ah Lam-soh and my mom got along well. Her children were about our age and we would play together while my mom and her mahjong kakis got on with their pastime. If we children didn't stay in the house, we would be in the back lane chasing after one another in some sort of game - be it hopscotch, soccer, etc.

Of course, at one stage, I got very interested in mahjong and would stick by my mom's side to learn more. She welcomed that. Mahjong is a bit like cards. It has suits and running numbers as well as directional and specially named tiles. There are also 'flower' tiles that number from 1 to 4. And you can play the game with joker tiles as well (they function just like the jokers in playing cards). With joker tiles, the game finishes much faster.

The mahjong I learned as a kid was based on the old Flower system where the winner may not be the one who captures the winning tile. The Flower system allocates points according to the kind of hand you have. So even if you are the one who "wu" or gamed, and if your hand was weaker, you could still be paying out more. The modern game has a winner-takes-all system. Besides, in the old Flower system mahjong game, you have to count and add up the points according to the tiles you have and manner of gaming. Figure out who pay who and by how much.

I remember this Flower system to be troublesome when real money was used. The points could translate into odd sums. With the new Hong Kong/Taiwanese style of playing, the sums are always in "fans" or multiples. If the base is 50 cents, then one fan $1. Two fans is $2, and three fans, $4, and so on in multiples ad infinitum.
The more fans you have when you game, the more money you would win.

The base amount (50 cents)  is what you get when you game without a fan. Usually gaming without a fan is considered amatuerish, and most games exclude that. Some seasoned players even set a minimum fan to game. In Cantonese, the base game is called "gai wu" or 'chicken gaming'. In my family, we usually allow a gai wu if a weak player is involved. But it is not much fun because winning at a basic level means there is no need to build a strong hand. (Imagine building a strong hand to be later "sabo-ed" by an easy chicken-gaming hand!)

In the fan way of playing, the person who throws the gaming tile has to pay double. This rule makes players think more carefully about the tile they want to discard. It is not so in the Flower system of playing. If you have a good hand, you just try to game. So, not much skill is developed in trying to out-play (or out-fan) another player. Luck hence plays a bigger role in the Flower system.

Up till the late-80s, mahjong was still played the Flower system way in Singapore and across the Causeway in Malaysia. Slowly but surely, it was edged out by the simpler and more straight-forward HK/Taiwanese way of playing.

Regardless of which system is used, there are many ways to play mahjong. My mom's approach is to be sensible. She'd lose less and win more. Another way to play is to go for broke. This is fine if all four players do the same. And mahjong can be played by three players instead of four. But the pace is very quick!

I have never paid much attention to mahjong, always treating it as a family social game to be played during Chinese New Year. As a social game our stakes are small, so no one would really go all out to win one. It's all left to chance and a little bit of skill. We rather expend the energy to chit-chat while clacking the tiles.

It was only when I started playing with my Engineering classmates that it got really competitive. Partly as a matter of pride and partly for bragging rights. But mostly, we were just trying to game in all sorts of  combinations to win BIG. So playing a strong hand became habit.

My uncle and aunty used to marvel at my skill. They really thought I had some wonderous skill bordering on the supernatural.

They forget that when four players play a certain way, luck has a part in it. If I'm lucky, I really cannot explain why. But then again, you have to position yourself to take advantage of that kind of luck. It's playing statistics to your advantage.

But over time this uncle/wife couple got so besotted with being 'mahjong gods' that they lost quite a bit of money. In the end, they swore off the game. Really, being highly educated folks, they should have known better.

For me, although I play well, I usually find playing mahjong beyond "two dongs" or two East winds, rather boring. Well, unless you have a few whiskey buddies to play and talkcock with at the same time. Really, there's nothing better than that. And always only play mahjong with people for social, not monetary gains. Being a good loser tells a lot about a person. And set the rule beforehand to say that the biggest winner must buy supper; it tops the evening-social best.

And it's not just the Chinese who play mahjong; I know Indians who enjoy the game too.

I had an Engineering classmate, Guna, who would not stand by idly to watch us Chinese boys play. He wanted to learn, so we taught him.

At the beginning, he would use a code sheet to help him tell apart the Chinese character tiles. When I saw that, I asked him to put it aside and to just remember the tiles by sight. He soon learned the words after a short practice. He was most grateful for my intervention.

Guna also got good at points-counting, i.e. summing. We were playing with Malaysians so we used the old Flower system of play (Guna himself was a Malaysian as well).

At the time, many Malaysians would leave their hometowns to study and work in Singapore. Our country's exchange rate was much more favourable so the guys would work, save money and return to Malaysia to do get married or settle down.

Frankly, Singapore's Engineering sector would not have grown nor flourished without these Malaysian counterparts. Quite a number of them settled here as PRs too. It's great to have friends who come from another country; you learn not a few things. And I've learnt that over a game of mahjong and some whiskey, one can learn even more!

Below: View of Ah Lam-soh's apartment (2nd level) from our home's back-balcony. We lived on the 3rd floor. Pix taken Oct 2012 (note the dilapidated state today). Many of the apartments are now rented out to PRC workers of restaurants or factories there. 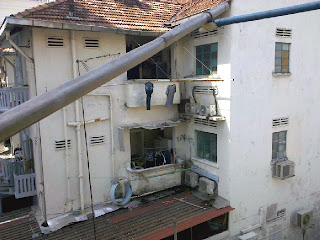