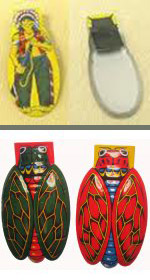 This innocuous little clicker toy was featured in a show about flea markets on TV recently. An antique shop in China Square had a whole bin full of it.

This toy is made out of tin and a steel blade. When depressed, the steel blade makes a cracking sound that's not too different from a large cricket.

During my childhood, this toy was cheap and provided many hours of distraction. There were many designs to choose from: Frog, Cicada, Cowboy and others. Oh, we also used the toy in spy games when the clicks would indicate a 'Yes' or a 'No'. I guess our teachers found us a handful when the clickers started going off in class. We would get caned of course, or be smacked on the hand with a ruler and have the clicker confiscated. We would then beg for it to be returned after class.

I remember one time the sharp corners of a clicker caught the fabric in my shorts pocket and caused a tear and a hole; I was in Primary Two then. My glass marbles inside fell out. From then on I kept the clicker in my shirt pocket but I would worry that it might poke through my shirt and into my heart. To play it safe, I kept the clicker in a match box in the end. It did feel adult to be carrying one of those picture matchboxes around!

Years later I would encounter this clicker again in the SAF. Some instructor suggested we use it to produce a kind of field communications code. We tried it for a while but found it predictable. What if the enemy used the same as a decoy? We knew at the time that it had been used in WWII before by some airmen during Operation Overlord. They were of a particular design and issued to members of the RAF. If a bunch of these airmen were downed with an aircraft and parachuted everywhere, a clicker was more discreet than calling out, "Hey, where are you guys?" It's especially so when it is night and in pitch darkness.