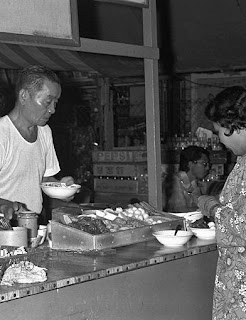 In this blog, I have written about food my Cantonese mom had dished up while I was growing up in Geylang. There were times when she preferred not to cook and we would then tapow from kopitiam zhichars and street hawkers. I was often the errand-boy as I liked to cycle. It beats walking from lorong to lorong. I could also take shortcuts through the many backlanes linking them.

Back in those days, cooked food could be found all over Geylang, especially around my neighbourhood.

For example, I could cycle to Lor 15 for fried Hokkien mee; Lor 17 backlane for char kway teow; Lor 19 backlane for "lor bak" or stewed pork; and Lor 17 for chicken porridge. For breakfast, the street market at Lor 7 and 9 had plenty to offer. (Like those round buns with fillings sold by Mr Bean. Back then it was beige in color and filled with black tau sar.)

But what's it like to buy stuff on a normal day like we do now, popping down to a nearby kopitiam or hawker centre for lunch or dinner?

Back then, we did not have hawker centres. We had street hawkers and kopitiams. My own home had a koptiam downstairs. It is still there but it has changed hands many times over since. During my time - besides serving coffee and kaya bread - this kopitiam had stalls selling chicken rice and wanton mee.

A plate of chicken rice was only 30¢. If you had asked for chicken drumstick meat instead, it was 50¢. My eldest sister Alice's favourite was to order two chicken wings and some intestines. That came up to only 30¢. In places like Chinatown, they used to serve chicken rice with black sauce and hot yellow mustard. It goes very well with white chicken meat. Stalls don't do this any more. It's a pity.

If my mom ran low on dishes, she would ask us to tapow pork chop from the kopitiam zhi-char opposite our block. Two breaded ones in tomato sauce cost $1.50. This kopitiam is still around and the zhi-char stall there was once famous for its 'Scissor Curry Rice' (like the one at the junction of Jalan Besar and Kitchener Road). If I am not mistaken, this Scissor Curry Rice place has since moved opposite Lor 11.

At other times, my mom would ask us to buy yong-tau-foo to go with some shredded g-cheong-fun soup which we would get free from our downstairs neighbour who ran a factory. They also manufactured noodles. Two yong-tau-foo pieces cost 10¢. Five was cheaper at 20¢. Back then the fish meat in these yong-tau-foo pieces were definitely "sai tor yu" or ikan parang (wolf herring) - all pure meat. That makes it firm and bouncy. These days, fishball meat is made from other fish and mixed with flour. If the fishball is made from sai tor yu, it's considered 'gourmet'. You'll have to pay a heftier price for it.

On weekends, we kids would often get hungry at about 4pm. That's also when street hawkers start turning up. We could expect a parade of them along Lor 17 where more families were resident. The kok-kok fishball mee seller, the rojak seller and the stewed meats seller (with his wares laid out on two large rattan trays and carried around with a pole on his shoulders) were regulars. This stewed pork seller would often park himself at our downstairs kopitiam serving customers already there. I especially loved his crunchy stewed pig ears - something I had learned to eat chilli with as a kid.

According to my mom, in the early 60s, one could get a stew-meats seller to "lor" (stew) a duck for you for just $1. You had to provide the duck though. Isn't that kind of neat? And apparently "shui arp"  or grass-fed padi field ducks are best for this; else the meats would turn out tough.

If we didn't have all that stewed stuff, I would go tapow chye tow kway. It was only 10¢. With egg, that came up to 30¢. My mom would often ask us to bring an egg along. Eggs then were not cheap, and so folks tried to save money by bringing their own. Hawkers also did not use eggs so often then. They would normally ask a customer before cracking them in. It was the same with mee goreng. We too brought our own eggs for this dish. A plate of mee goreng went for 30¢.

Along Sims Avenue would come this chwee kueh seller with his cart. 10¢  would buy you five chwee kuehs. And they were larger in size than what is served today. And they were cooked in tiny clay bowls, not aluminium ones like today.

Porridge was something we often had as kids especially during the rainy season. It's warm, filling, and nutritious. An old man who lived in a traditional Chinese kampong house (there was a short row of them in Lor 17 next to our neighbouring block) sold very good chicken porridge. A bowl was 50¢. I liked that it came with those crispy golden fried beehoon bits on top. Stalls today don't use this condiment any more. It's a pity because it  makes a world of difference to the porridge, especially chicken porridge. Pork porridge was cheaper at 30¢ a bowl. (Morning peanut porridge and a small plate of fried beehoon cost only 5 cents each at the "small market" at the end of Lor 17. An old lady hawker would carry her stall there and we would sit on small stools along the five-foot way to eat.)

As a comparison of how far prices have shot up, a cup of kopi-O (black coffee) back then was just 5¢. As my family was large (we kids drank coffee too) we would often tapow kopi-O with a tall enamel kettle or giant mug. That came up to just 10¢.

When my family spent a year in Sarawak, we noticed something strange. The hawkers there did not sell char kway teow at all. The more common was fried beef noodles. They cost $1 a plate. My mom also noticed that wet markets there never sold cockles (one of her faves). It was probably because the waters there were too deep. Cockles are usually found in intertidal sand and mud beds. Cockles fried in sambal chilli is one of my mom's favourite dish (and mine too! One hawker stall at the Chong Pang FC at the junction of Sembawang Rd and Gambas Ave (opp the old Lady of the Sea Church venue) used to serve up excellent chillied clams and cockles. When the FC was demolished, nobody knew where he moved to. What a pity!)

Of course, back in those days, housewives slaughtered their own chickens. The birds were cheap, like some 50¢ per kati. A typical bird weighed between one and two katis.

There were other hawker foods that plied along Sims Avenue/Geylang - the place I called home. Strangely, after all these years, that place, somewhere between Lor 17 and Lor 19, is still full of makan places. I guess some traditions don't die, like the red-light district kind over at the side of the even lorongs. There, you can find frog-legs porridge. Nope, I don't remember ever tapowing that when I was a kid. It would be interesting to know when this dish 'leapt' into our Geylang consciousness and food topography.

[I grew up in Geylang but was born in Changi, near the present day Kembangan MRT station. My mom remembers the year of my birth where hawkers would ply, passing our simple terrace house unit. There were a few kampongs (Jalan Sayang, Lorong Marican, etc.) nearby and these hawkers sold a variety of stuff, - from Chinese keuh-kueh to Malay ondeh-ondeh. She remembers an Indian hawker who sold mee siam. His mee siam was delicious but had few condiments: only chives and chopped up fried taupok. The mee siam was like five cents a plate. Interestingly, my mom says they would also sell 'hak mai jeuk' or pulut hitam (black glutinous rice dessert)]

Wanton Mee in Sembawang that's old school like the one below my home in Geylang. Sweet! 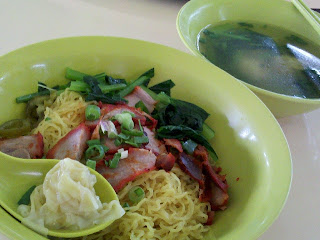