Knotting Off To Sleep 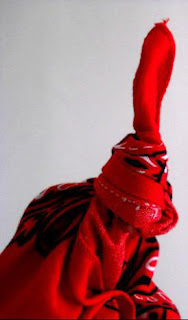 I was trying to remember the other day when I first tied a knot. No, it wasn't with shoes. The memory came back to me when I was rubbing Tiger Balm under my nose to help me sleep.

To tell you the truth, I have not done that in a million years. It was the smell of Tiger Balm that compelled me to try again.

When I was a kid we siblings pretty much went to bed at the same time. Since there were seven of us, we all slept on a mat over a thin mattress on the floor. I liked sleeping on that mat. It was very cool even on a warm night. And according to my mom, more hygienic.

Sleeping together like that, it was problematic when one of us could not sleep and fidgeted about. When that happened, my mom would take the corner of a  "mo gun" - a small towelly kind of handkerchief - and tie it into a knot. She would then douse it with "fung yau" (Cantonese for medicated oil). We often used the Axe brand. She would tell us to hold the medicated knot and sniff it to sleep. Strangely, it worked most of the time. In my case, if that didn't pan out, I would request to watch late-night TV. Usually my mom would acquiesce out of habit. I would then watch until the national anthem was over and the static come on. So in many ways, I was a "static" baby (pun).

Remembering this knotty issue has also helped me recall a game we kids used to play. It was a kind of finger puppetry, with that knotted handkerchief taking on a character.

We would play opposite one another sometimes using a satay sick as a kind of wayang stage weapon - a local version of the well-known version of the Punch and Judy Show. We often played this game whilst waiting for our school bus outside our school. On a hot and sweaty day, we would turn that hanky into a hat by tying all the corners into individual knots. It will work if you don't have too big a head.

Come to think of it, my mom also used this knotty sleep solution (sounds kinky!) on other occasions. I often got car-sick before I turned 10 and sniffing on that knot of medicated oil helped to make me feel better. Later, as I rode the bus on my own, I would see aunties doing the same thing, especially when the bus was crowded and stuffy. I think it worked both ways then: A cure for headaches and at the same time, to mask body odours that steamed in that often crowded bus.

In those days, women wore sleeveless "mah-lui" (Cantonese for mother-daughter) blouses and they would tuck these small hankies into a sleeve cuff. Others would simply tie theirs to the handles of their handbags or marketing baskets.

With the MRT getting so crowded  these days, it might be worth revisiting this knotty solution to have a more pleasant ride. 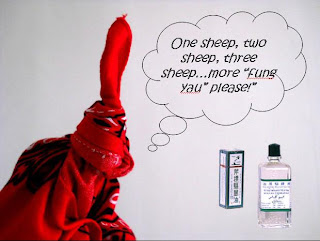