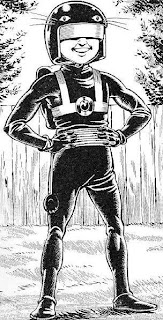 Remember the Beano comics from the UK? As a kid, I had a neighbour who loved that comic book. I would hang out at his shop/home to read. Later, I pestered my dad to buy a few copies from our regular book haunt: Sungei Road "Thieves" Market. Back then SRTM (or SRM for short) was like that famed Thai Chatuchak Market. The stalls were proper stalls and had a great variety of goods. Perhaps British troops withdrawing from the country was the reason. The Beano comics we bought were thick annuals, which was a great read on a rainy day!

Besides the antics of Dennis the Menace, there was another story series that I liked: Billy the Cat. Actually, it was Billy the Cat and Katie, the girl (cousin?) being the other half of this cat-suit wearing/crime-fighting duo.

However, their suits were nothing feral like Cat Woman's or Batman's. They looked racer-like with the helmets and visors covering their heads and eyes. They remind me of blind Geodie in Star Trek: Next Generation, altogether pretty advanced. I don't think it was ever explained how the visor worked; it just was. As a kid, I found that visor to be quite cool.

Cool too was that claw-like thing that hung by their side. The kids would use it to haul themselves up high walls and to catch the bad guys with. That claw was also handy in rescuing themselves from binds and such. As a kid, I would make myself a paper claw and throw it at the railings to pretend scaling them. At one time, someone gave me a keychain that came with a small alligator paw. I would pretend that it was the Billy Claw and play with it as such during my idle moments. It's funny how memories are sometimes triggered!

Besides the claw, the kids in Billy the Cat and Katie also fought crime with a mission backpack that held all kinds of tools and tricks. That made us kids feel like we were mini-James Bond spies or spy kids (like that same-named US movie).

One particular gadget Billy and Katie later deployed (and that I enjoyed tremendously) to fight crime with was this bunch of remotely controlled robots that moved and behaved like real people. They were not huge - just a foot high, which made them the more endearing. At a time of clunky robots, these smooth walking/talking humanoids were quite something. I remember thinking: "Whoa, how advanced! When will we ever see something like that!?" Besides behaving like humans, these robots were also able to act together in a sort of group dynamic - perhaps empowered by swarm intelligence? I recall the tiny robots looking very much like mini-versions of Billy and Katie in costume, which meant they looked like miniature Iron Man(s) running around!

That was my first introduction to remote control, robots and advanced robotics all at one go. Later, those tiny robots would remind me of the ones Arthur C Clark imagined in his Rama book series, robots that were brought into space to help explore an alien object. A better visual of the robots would be the agile ones in Will Smith's I, Robot, albeit on a much smaller scale! You know, if such tiny intelligent dynamos do exist and go rogue it would be very, very scary indeed!

In the past year, I had worked hard to bring in programmable robots to help kids better learn robotics at a public center. These were also foot-high and could be programmed to dance, perform tai-chi and even do a slow cartwheel. These robots had a somewhat humanoid but skeletal look, made of aluminum and  interconnected by servo motors at the joints. At the time, a local polytechnic had also created a software version of them - one that you could program and place in a virtual environment. The best thing was, with the friendly computer interface, you could actually also control the real-world robot with whatever the virtual robot had learnt. It was all pretty useful and convenient at the time. But the real gem was allowing it to navigate in 3-D virtual space. One could indeed play the role of virtual 3-D architect.

There have been many advances made to such small humanoid robots. Many of the cheaper ones now come from South Korea. I, for one, hope to see a small agile robot with a smart vision system or one with true AI. It's not so different a wish I had back in the 70s when I was reading Billy the Cat. Sigh, sometimes advanced technological ideas do take a long time to become reality, just like 3G networks and their companion smart mobile phones! (That took 10 years! My goodness! Who knew then!)

But at least one good thing did come from reading Billy The Cat: it inspired me to go on to learn electronics, in particular, RF. I am actually and naturally a more mechanical guy but I thought learning electronics (and RF) would aid my natural abilities. How true!. Perhaps one day I will return to fiddling with transistors, diodes, servo motors and programming software to build a humanoid robot. After all, I was nominated once for a national technology award for building something very useful. Stuff like this is not beyond me. Sci-fi dreams can come true, don't they?