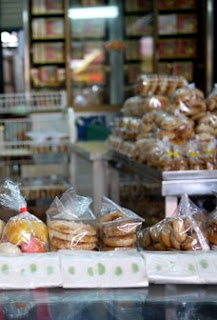 Recently, while walking past Japan Home (a store that sells household essentials from snacks to pots and pans), I was surprised to see Chinatown's Tai Chong Kok mooncakes being sold there. They were put in brown paper carrier bags like those commonly given out by provision shops when I was young. They were the equivalent of the plastic carrier bags taken out by  consumers from NTUC supermarts today.

The only difference were the strings. The original ones had  a two-tone twist of red and white. The last time I saw such bags were at the Museum of Shanghai Toys in Rowell Road a few years ago. I read somewhere that present-day TCK uses these retro paper carrier bags twice a year for their confectionery promotions.

When I was a kid growing up in Geylang, my mom would often go to Chinatown to shop and do a bit of jade hunting. If she went alone or with my other siblings, I would always wait eagerly for their return. My mom would inevitably bring back some snacks from Tai Chong Kok, a major traditional confectionery there. A common snack was pak feu peang or White Ash Biscuit. The other that I liked was kei ji peang (literally Chess Piece Biscuit). They do indeed look like Chinese chess pieces in size. It is a semi-hard biscuit made out of bean that tasted like brown mooncake skin. Even today, I would have to stop myself from stuffing myself silly with this delightful biscuit. And it goes very well with black coffee.

Pak feu paeng is still available today. It has an ancient story about a lazy wife behind its origins. Because she was lazy and taken to lying in bed all day, her husband worried that she might starve when he went away on business. So in order to prevent that, he baked a large pak feu paeng or her to wear around the neck. But despite his good intention, his wife still starved to death. She was too lazy to even turn the biscuit around after eating what was in front. I believe this story was once told by Lee Dai Sor over Rediffusion... One of the many moral tales he often told to his rather captive audience, my mom being one of them. I still remember the catchy opening ditty to his show! Link here: Lee Dai Sor Show (The tune also reminds of all those old sword-fighting movies on TV, the ones where celestial gods are involved!)

Other snacks that my mom would buy back are wan pin kou, kai zhai paeng and yi zhai paeng on her trips. Wan pin kou or Cloud Slice Cake is a small white slab wrapped in pink paper. It's about the size of a large smartphone and just as slim. This rectangular snack is sliced equally in oblong strips which makes it easy to tear off. It is still sold at coffeeshops  - those with the snack shelves. But I find these mass-market produced ones too sweet and crumbling easily. Another wan pin kou came in thick rombus shapes with two visible spots of gelatin that's either green or white. We would dip this in coffee too. The white powder in this wan pin kou is actually glutinous rice flour mixed with fine sugar - why it taste well with black coffee.

Kai zhai paeng or Chick Biscuit is a wafer thin biscuit that packs quite a punch. It is very savory with a somewhat liquoriced flavour because Five Spice Powder one active ingredient. Why, perhaps, it was wafer thin. I suspect one ate this while savouring a cup of Chinese tea. Despite its name, there's not one bit of chicken in it! It does make one wonder why. However, some new recipes do include chicken stock to make it even more flavorful. Apparently in Malaysia, you can find both thick and thin kai zhai paeng biscuits.

Yi zhai paeng or Ear Biscuit on the other hand, did look like what it was called. It came in small pieces curled and depressed like shells or ears. Like kai zhai paeng, yi zhai paeng went well with black coffee. It is still being sold but I think the flavor has changed quite a bit.

Another biscuit that goes extremely well with coffee is hup tho sou or Walnut Crisp Biscuit. This one is a round and oily and crumbly biscuit made with walnut. I liked it in small doses because anything more would send me to the toilet. For some reason, overly oily biscuits made me do that as a kid.

Actually all these biscuits seem to go well with black coffee. It made them such good leisure snacks when you were relaxing and having a cuppa. There is a coffeeshop in Kluang, Malaysia that does just that: Sell leisure snacks and drinks. Malaysia does have a more vibrant yum cha (tea time) culture than Singapore. No wonder the waistlines of men over there have been shooting up these past years.

Another confectionery item my mom would bring back was tan tart or Egg Tart. My mom would usually get them from Tong Heng. Another place she bought them from was a popular stall in People's Park Complex Hawker Centre - the one that faced OG Departmental Store. Another snack she would also buy back were those giant-sized soon kueh. A middle-aged lady dressed in samfoo sold them sitting on a wooden stool from a round, grey iron pot in that open area between PPC and Majestic Theater.

Another signature cake my mom would bring back is TCK's egg-butter cupcake or kai tan gou. They were brown in color, about two inches thick and shaped like a mayflower with slices of almond or kua chee (melon seeds) stuck on top.

And who can forget also ham cheem paeng - that dough fritter pancake that was either salty or sweet. When sweet, it is often lightly laced inside with red bean. For some reason ham cheem paeng was associated with a woman's privates; goreng pisang with the male organ. We kids would giggle and tease about it.

Talking about snacks reminds me of tho chee paeng or Belly Button Biscuit. These fat little oval biscuits no bigger than your fore thumb were very popular and came in a bluish rectangular tin that was pretty sharp at the edges. These biscuits were called "gems". I think the brand was Jacob's. For a long time, we used this biscuit tin as our sewing box (until it was replaced by the safer and round Kjeldsen's Danish Biscuits one). Another variation of this biscuit had a tuff of hardened, colored sugar icing on it (called a "jewel gem"). Interestingly it is being use as spirit food during Hungry Ghost Festival - something you could even buy from the joss offerings shops. Another popular biscuit then were the round tins of the aforementioned Danish butter cookies. For us kids, this was the 'top end' of our biscuit world! We would scramble to choose the best "assorted biscuits" typically found in each tin.

Because of their small size, me and my siblings often used tho chee paeng as toy food in our play tea parties.

There's also one other snack that we siblings all agreed on. It's the sart kei mah - a sticky yellow cake that's actually made up of compacted flour strips. It's egg based and covered in yummy sugar-maltose syrup. I understand this snack was created from Machurian ancestor worship culture, with sart ke meaning 'cut' and ma meaning 're-arrange'. In Cantonese, sart is 'kill', ke is 'to ride' and mah is 'horse'. In HK, this snack is associated with horse racing.

When you are young and with many siblings, you don't think too much about the snacks you often eat. Just happy that they are there. But mothers do pamper their children even though they scold and cane - why it is good to give your parents surprise treats when they get older. In this regard, I wonder what my mom miss eating today. Maybe her favourite tan tart?