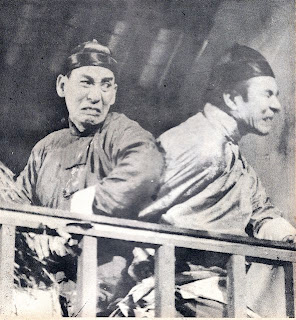 In the 60s and 70s, I remember the Chinese movies we watched on TV were mostly flicks from Hong Kong. They were either modern dramas or period wuxia films.

The wuxia films had some sub-genres. There's the Very Ancient Sword-Fighting ones and the Near-Present Pugilistic. The VASF featured opera costumes, swords, spears and extreme 'qi' techniques. The NPP ones had few or no weapons, mostly relying on fists, kicks and flips and was set typically in a small "chun" (village) or town.

The VASF stars of the day were Tho Tat-Wah, Nam Hung, Leong Seng Po, Tang Pik Wan and Shek Kin. LSP was the older of the group and would often play (1) patriarch of the family, (2) clan head, and (3) family "koon kar" or head servant. Besides him, these roles also went to Cheong Wut Yau and Ng Cho Fan, who, with their gravitas, were both very ideal as martial arts elders. Shek Kin, with his natural evil looks, often played the bad guy. If there was a kid, it was usually Fong Bo Bo, the Shirley Temple of Asia.

In these stories, Tat-Wah and Nam Hung were often fellow disciples along with Pik Wan. There's usually some love triangle going on amongst the "si mui" and "si heng" (fellow disciples) - something frowned upon by their "sifu". Wu Fong would also be in the mix but I saw him and Pik Wan more often in modern dramas.

In these VASF films were also timeless items such as "Tin San Suit Lin" (Mount Tin snow lotus) and "Sin Tan" (saint medical pills). TSSL was a hard to find cure-all, especially if one is badly poisoned or hit by "Yu Loi Sun Jeong". If you were on the verge of death, a last-resort-cure would be Snow Lotus. But to add to the drama, it is usually very, very hard to find, requiring you to cross rivers, climb mountains to even catch a glimpse of it. It was definitely not sold at the local pharmacy! As for ST, the effects were the same. But it was usually bestowed by a heavenly saint, hence its name. In the 40s and 50s, before wuxia authors Jin Yong and Liang Yusheng came along, many of the wuxia films were either based on real kung fu or mystical story elements - why in some films, we see the wuxia disciples talking to deity figures in the clouds.

Pioneering authors
It was writers like JY and LYS who elevated wuxia elements to a fine art, with things like "dim mak" (pressing of sensitive pressure points usually to immobilise an opponent or to slow the flow of poison through the body), "Qing Gong" (leaping skill) and the various fighting formations found in Wudang and Er Mei kung fu. There were lots more including those found in dark martial arts such as "Jiu Yang Zhen Jin" (Mandarin, Nine Yang Manual) and "Jiu Yin Zhen Jin" (Nine Yin Manual). Both JY and LSY, through their scholarly knowledge and imagination, mapped out the nature of the "Mo Lam" or "Wu Lin" martial arts world where none existed before. Their martial arts novel were neither pulp material nor high-faluting stuff. You could call them a mix of Lord of the Rings (adventure and valour) and Shakespeare (politics and personalities). In secondary schools here, students start to read JY and LYS in Sec 2 as part of their Higher Mother Tongue subject required reading.

A veritable Master Wong
On the other hand, NPP movies were often set in a village or small town that needed a hero's help in combating an "orc ba" (bully) or "san chart" (mountain bandit). Many a times, these movies played up folk hero Wong Fei Hung. Before Jet Li, Kwan Tak Hing was synonymous with this titular role. TH's bulging eyes, gaunt face, lean frame and operatic way of speaking, especially when delivering some gem of Confucian wisdom before dispatching the bad guys were highly impressionable on us young kids. We would swear off doing bad deeds after watching him; probably why our parents encouraged us to watch his films in the first place.

TH wasn't young and I remember thinking what a great grandfather he would make. As a matter of fact, many of his WFH films were done in the early to mid-50s. In 1956 alone, 25 such films were released to the cinemas. Despite his age, Tak Hin was fit and agile.

Unforgettable baddy
A hero needs a nemesis like Batman and his Joker. For Kwan Tak Hing or Wong Fei Hung, his opposite number was Shek Kin. I tell you, you cannot find a man who looked more evil in Chinese cinema.  Shek Kin's slitty eyes,  'broad-sword' eyebrows and swept-back hair all make him look abrasive and conniving. He was so convincing in his bad-guy roles that he was afterwards forever known as "kan shek kin" or Evil Shek Kin, just as Eli Wallach was the de facto bandit in Clint Eastwood's spaghetti Westerns.

In real life however, Shek Kin was a very nice and generous man who once gave away a piece of land to help promote Hong Kong's cultural art scene. Despite his on-screen persona, he neither smoked nor drank and he doted much on his family. Still, he would get spat on or cursed when indignant fans encountered on the streets.

Masters of real kung fu
Both Tak Hing and Shek Kin know real kung fu. Tak Hing learned on the set from the direct disciples of Wong Fei Hung. He would later set up a martial arts school and an old folks' home. As a kid, Shek Kin was weak and sickly so his parents sent him off to learn martial arts, as was the wisdom in those days. But unlike his peers who were usually sent to Chinese opera troupes, he learnt his martial arts direct from the schools. There was Laohan, Chaoyan and Baoding (boxing). But probably the most famous was Ching Woo Athletic Association, an institution made famous by Jet Li in that 2006 film about Huo Yuan-jia. Shek Kin did not learn from HYJ but from his direct disciples. As a matter of fact, Shek Kin was so good that he was certified a teacher-master of the Mantis Fist and Eagle Claw, an aspect of Northern Shaolin kung fu.

Shek Kin retired in 1995 after having appeared in nearly 360 films, 80 of which was as Wong Fei Hung's nemesis. He passed away at age 96. Who said bad guys don't live long?

A popular plot device
Looking back at these modern dramas and wuxia films, I am reminded of a plot device that was commonly used then - the "yi sup neen cheen" or "20 years ago" recall.

This recall often happened when a bad guy is about to get his comeuppance. The mother would say, "No girl, don't do it.... He is your father!" or something like what happened between Luke Skywalker and Darth Vader in Star Wars. Then the back story comes: "20 years ago, on a dark and stormy night..."

In VASF, this kind of 'reveal' would often involve rival martial arts heads, who had some liaison in the past that produced progeny who later go on to champion opposing schools of wushu. In NPP films, it would involve a mother who was once jilted by a rich family's son. Twenty years later, their paths cross and the secret is out. Or it could be that the mother was once raped by the bandit some two decades ago. Sometimes, the girl in question would start the sob story by having to "mai kor chong fu" (sing to bury a dead father) often in the street and in front of some rich man's home. The lady of the mansion takes pity on the poor girl (and mother) and hires them as servants. In time, the girl learns that her new employer's daughter is actually her half-sister, but not before falling in love with her half-brother. The head of the family also realises that the new servant mother was his first love and this causes friction between him and the present wife. He was the poor scholar who left her to marry the rich lady.

A complicated affair
Yup, it can get pretty messy relationship-wise in the movies of the 50s/60s. Maybe it is because back then, men had many wives and cases of incest and abandoned children/partners were aplenty. But how often does it really occur in real life? In a news report recently, a sperm donor was overwhelmed when he found out that he had fathered 150 children over a period of ten years. So, ten years from now, their mothers will go "Yee sup neen chin..."  or "Twenty years ago....". See how it works?

As you can imagine, things being revealed by the 20-Year Recall often elicited shock, disbelief and tears from the affected person, usually a poor, hapless and lovelorn girl. And the scene would often play out on a dark and stormy night heralded much by thunder and lightning. Mothers really know how to choose their timings. Or maybe the kids in question would engage in a bit of incestual liaison in a disused temple or abandoned hut....all because of rain. Guys do get it on easily after seeing a girl in a wet tee or samfoo.

Avoid the 20-year curse
So, the next time when you find yourself taking refuge from rain with a guy you fancy in a quiet, private place, do have your wits about you. Keep your knees closed and talk about family history first. It might save your kids much pain 20 years later! Or perhaps in future, we could all carry ICs (identity cards) that spell out our degrees of separation genetics-wise. Like some Quick Response photo-snap thingy, you can email your info to a checking agency toute suit. Saves a lot of future heartbreak!
Posted by TC Lai at 9:45 PM