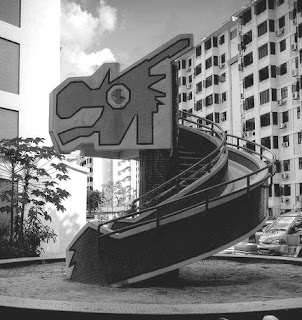 I grew up in Geylang but went to Mattar Primary School next to MacPherson HDB Estate some 5km away.  As a result, many of my classmates came from there. The estate was quite quaint. Most of the flats (about 40 blocks) were located in a circle, ringed by the aptly named Circuit Road. But unusually, a third of this circuitous road was formed by Pipit Road, which itself had a few blocks of flats to call its own. Another set of blocks were also located along an off-road called Balam Road which ran beside a canal.

So, many of my classmates had addresses in Circuit Road, Pipit Road and Balam Road. Only three or four classmates stayed near me in Geylang.

Going over to MacPherson Estate to play meant I was never short of friends and classmates to hang out with. Sometimes, three or four of them would live in the same block. And once we set our minds on going out, we would use the telephone to get hold of everyone. If someone did not have a phone, we simply ran up to the flat or call them from the common corridor. Most of the flats were three-room affairs, so the corridors ran straight from one end-staircase to the next. Seldom did we take the lift (they did not stop at every level then). The phones we used were the old rotary pulsed ones common in those early days.

A typical visit to MacPherson would see me visit Blk 57 first. I'd drop by Chuan Yeow's place and together  go look for Hup Boon who lived on the 2nd storey. HB had a phone, so we would normally call up first. His mom was a very nice lady who would always offer us drinks and cakes. After HB, we'd look up Mui Chow or Lucy Teo - they both stayed in the beside block. There was also Koon Hai, a skinny chap with a mousy Brylcreamed look. Like him, HB was also well-groomed with his brown tinged hair parted and always creamed in place. He carried a comb in his back pocket all the time. HB's school uniform was one of the neatest. He and I wore the same kind of kaki shorts to school, not very different from what the policemen used to wear but shorter. Our school uniform was grey below and yellow on top - quite striking. Come to think of it, we also wore the same kind of starched shirts. So, in a way, we were kindred souls - brothers in suffrage from wearing those stiff shorts and shirts!

No kid should have to wear starched shirts to school in our kind of tropical weather. But because of that, I learned how control my discomfort, often psycho-ing myself to remain cool despite all that heat. I could easily have become a yogi in India for performing such a mind trick all those years in school.

If we did not look up the girls, we would head to Blk 76 to look for Lee Huat - the fella with the Chopper bike (see blog A Chopper Legacy). Living around Lee Huat were Woon Leng and Bee Har. BH was fair and pretty but she stood out for being very petite. She was so small in size you could have stringed her to your mobile phone! (Just kidding.)

Size notwithstanding, she had a big heart. Her hazel eyes often betrayed her shyness. However, step on her toes or disturb her best friend and she could be sharp and reprimanding. WL, on the other hand, was tall for her age. She was the smartest girl in class and always spoke in an easy, sweet voice. Her distinctive feature were her panda eyes - they made her look as if she hadn't slept in a while. BH and WL were good friends; they kind of complemented one another. BH could be fierce whilst WL tended to cry more easily.  Another good friend of theirs was Adelene Wee who lived  a few blocks behind. She had a lot of hair, mostly wiry, and she's one person who seemed always cheerful. I think it was her religious ways that set her so. She spoke good English with a distinct nasal accent and was the only one who wore her pinafore over the knees longer than the rest.

What did we do when we came together? We would play Skip Rope, Five Stones, Hide and Seek, Police and Thief. At times, we played table tennis on those purpose-built concrete tables. We also moved from one playground to the next.

Often, the kids with bikes would bring them along. For those who didn't (like me who did not live there), we simply "tompang" each another. I would often ride pillion on LH's Chopper bike.

MacPherson Estate had quite a few playgrounds then. As we moved from one playground to the next, we would always knock on the doors of classmates who stayed nearby. These playgrounds were the old ones made of iron and concrete materials. There were ring tubes, round climbing frames, spinning carousals and monkey bars.

A big playground could be found near the wet market at Blk 66A, where we often hung out at. Then we would call Pow Choo, Poh Lin and Puay Hoon to come out to play with us. PC reminded me of Nancy the cartoon character because of her hair and small beady eyes that needed thick glasses. PH was a girl who fell sick easily and didn't or couldn't join us all the time. She was often pale and sniffing a knotted hanky covered in Axe medicated oil. Lately, she has informed me that she suffered from severe anaemia as a kid and fainted often in school. Nevertheless, as a kid with such a worrisome condition, she was still spunky and full of grit went on to join the National Cadet Corps in secondary school and Singapore Police Force later. Poh Lin had a loud voice that matched an outgoing personality. She was Cantonese just like me and we got along fine. She was a brave girl not afraid to speak her mind. She would later argue much (always in a good-natured manner though) with Mr Pang, our P6 form teacher. You could say she liked to tease him. He in turn treated her like a Teacher's Pet. The same with a girl called Lin Hiong, who was like a mother hen to the rest of us.

Across from this big playground was Balam Road, where Ee Meng and Yong Meng (not related)  lived. We often teased YM for being a horse because of his gait. He had a butt that stuck out like a horse. EM was not a  very good student and liked to be active. If you didn't know him, you would think he was a gangster from his rough voice and gruff Hokkien. At Balam Road, we would find Sarbjit Singh and Ramli and a few other of our Malay classmates. Many were relocated from nearby kampungs.

For food, there's always that food centre next to the bridge that crossed the canal to my school. We seldom ate there unless it was to look up classmate Subari whose family had a stall there selling mee rebus. My classmates tell me his father was very generous and would give them 10, 20 cents each time to spend. Subari was also generous like that.

The canal that ran beside it was long and wide. It connected Paya Lebar to Geylang East. We would sometimes stand on the bridge to watch the canal waters flow under. Back then, it was filthy - the color of chee ma wu; and we would look out for disgusting stuff like dead dogs and rats. Most of the time however, what we saw were daily-use items like plastic bags, beer bottles, broken furniture, rattan shopping baskets, and the like.

This canal ran behind my school, bordering an area overgrown with shrubs and lallang (see blog Big Field Wild Fence). We were very sure there were pythons and spiders inside. Because of the thick brush, there was no way we could get in there to retrieve our lost balls and marbles. This wild area also added to our imagination about headhunters looking children's heads to build a bridge. Later I would learn that the story was concocted to discourage kids from wandering too far from home!

Beside that long food centre was the bus terminus. This bus terminus was not a built-up area; it was simply the side of the road. Buses arrived and departed to go to various destinations around Singapore. For me, the regular services to take home were 61, 62, 63, 135, 158.

If I took 135 or 158, I would alight outside Methodist Girls School at the junction of Sims Avenue and Aljunied Road and walk home from there. The other buses would bring me nearer to Lorong 19 on Geylang Road.

MacPherson Estate at the time was also known for its gangsters. Many were said to reside around the Balam Road area. It was in this area that two-storey shophouses could be found. I often wondered what kind of protection money the business owners had to pay, an idea no doubt fueled by violent Hong Kong TV serials at the time.

As kids we loved to go to the bookshop and cakeshop there.

The concrete table tennis tables mentioned earlier could be found all over MacPherson Estate. When we were not playing table tennis, we would lie down and just look at the sky.

Another wet market (a two-storey one) was located at Pipit Road to serve the residents there. Because it was separated by a road, we seldom ventured there.

I think Ms Leng, my P4 form teacher, was the only teacher I knew staying in MacPherson Estate. As kids, we were very curious what our teachers were up to (like married or not; got bf or not) and would trail them home to find out where they lived.

In my childhood time, MacPherson Estate was a very lively place with the coming and going of buses, cars and people. Today, it looks deserted and feels very much like a ghost town. Only old people seemed to be left. I wonder if I should drop by and see if any of my classmates' families are still there and perhaps be fortunate enough to reconnect with them again.

Below: Meeting for the very first time after 38 years! A week later, two more classmates were found, making a total of 12 of the original class of 44 classmates reconnected.