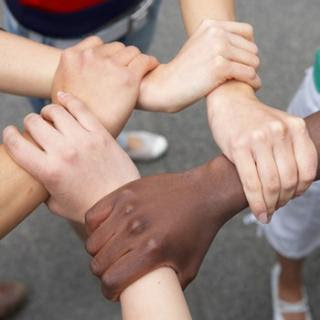 The other day went by like any normal day but it was Racial Harmony Day. I didn't grow up during that violent period of our country's history when races had running street battles with one another. But still, years later, it would come back to haunt my mom and her neighbors.

If you visit Geylang, you'll notice that it consists mostly of three-storey terrace blocks. Shops below, living quarters above, winding staircases behind. I lived nearby Lor 17 that had both terrace blocks and kampong houses (the wooden sort built on concrete pillars quite typical in Geylang). Each of these kampong houses was also fronted by a curved cement staircase that led to a small courtyard. Altogether, it was all quite neat. In those few houses lived a couple of Malay families while the rest were Chinese.

I often went marketing with my mom and siblings to the butcher and veggie shop at the other end of the lorong. One day, on the way back, someone whispered to my mom that "the Malays are beating up the Chinese!" This was a common cry during the earlier race riots!

We could see other people walking away quickly, concern on their faces. Ahead of us, a group had gathered, some holding big sticks. They were just outside the homes of the Malay families. My mom recognised a few of them. One Chinese uncle approached and told my mom to quickly bring the children home. He then added: "Don't worry, we will protect them." By that he meant his group of neighbors would stand guard outside the homes of the Malay families. No riots happened that day but I realised at the time it was something folks from my mom's generation guarded against.

In the past, my mom often told stories of pregnant women being hacked to death, of children being shown no mercy, of running battles between mobs, etc. Oftentimes I wondered if she got her WWII events mixed up. But she lived through the riots, had to hide sometimes, so maybe the violence was either true or worse. Because of the actions of my neighbours, I never felt the need to be on my guard whenever I walked along Lor 17. I knew then that that Malay uncle and aunty would look after me just like they were similarly looked after by others on that scary day.

That was the one and only racial riot incident I've experienced in my time. Although this incident turned out to be just a rumour, I think by then, racial incidents were on the decline or became a non-issue. With HDB housing (and its controlled racial tenancy), the interracial situation became better and we became even more tolerant racially as a result. I can't think of a place when growing up, skin color really didn't matter.

Previous story: The Backlane Wu Ladies; Next story: A Privileged Childhood
Posted by TC Lai at 10:14 AM