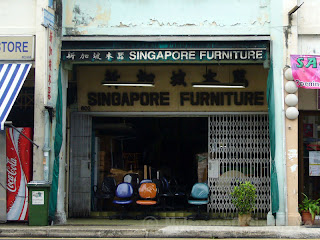 Reminiscing about growing up in Geylang has made me realize that I actually had quite a privileged childhood. Privileged not in the sense of riches but in the sort of neighbors I had. Many of the shops below my home were some sort of industry. Today, such businesses have all been moved to specially planned industrial estates. Children now grow up instead in separate residential areas. Kids only consume goods and don't get to see how these goods are made.


I used to live along Sims Avenue and below my home, at a corner, was a metal workshop. The folks there beat and welded grills of all kinds - windows, doors, etc. Further up the row was a laundry shop and beside that, a shop that distributed all sorts of sweets and snacks. Remember Ken-Ken Cuttlefish? Its giant cuttlefish logo was painted on their VW vans and stood out like a monster billboard. Of course, there's that noodle and g cheong fun factory I have often spoken about. In an alley from Lorong 17, I've also mentioned before that ice factory and scoop ice-cream maker. Their neighbours were themselves into the lubricant and car parts business. Living amongst them afforded me the chance to see how some things were created, made and even traded then.

(Here, I use the term 'factory' and 'shop' interchangeably. Although purposed differently, they were essentially the same kind of living space. Owners of factories also lived on their premises and their shop fronts were usually boarded up with planks at closing time or shut with those accordion-style metal gates.)

A good friend of my mom's lived on Lor 17. She was called Tan-soh or Egg Aunty. She sold eggs from her farm from her living room. Further along Lor 17 were a couple of printing presses. I used to be fascinated by their tiny letter blocks (made of lead) that were often strewn all over their production floor and also outside along the 5-foot way, especially after a press run. It was here along the corridor outside that they arranged the letter blocks. I remember one day finding a small lead statute of a deity among the litter of blocks. Did the company who made those tiny letter blocks also made such statutes? Or did someone fashioned them out as a hobby?

My aunt dated a guy whose family owned a tailor shop along main Geylang Road. Nothing out of the ordinary except that it was near to a shop that specialized in making straw hats: the kind made from flattened plastic drinking straws sewn together. We used to buy the wide brimmed ones as sunhats! And we also learned to make them on our own (just intertwine two straws into a hexagonal shape strip.)

At Lor 19, a business dealt with raw rubber. Bales of which (painted in white) would come and go from their premises. I tell you, rubber import/export is a pungent, stinking business! Further ahead from this (along Geylang Road) were the usual provision shops and shops selling temple and joss wares. These joss shops also made their own funerary paper houses. Some of these paper houses were rather sophisticated and featured scenery screens that revolved!

At where Aljunied Road intersected with Geylang Road (Lor 22 actually), there's a shop making and selling luggage. My sister's school bag (the small hardcase type) was repaired there once. If you had a design, they would make it for you. Diagonally across from this shop was the post office which itself was near an aerated water plant not far across the road.

Besides these industries, some of the back alleys were also occupied by food businesses. One of my favorite sold starfruit juice from a small wooden cask. Another cooked up delicious Hokkien Mee. Yet another provided neighbors with loh g yuk (or lor bak, a soy-sauce stewed meat). The food businesses might have their own stalls but they were also inclined to send an employee out with a shoulder cart to sell their wares around the neighbourhood. The LGY fella in particular would stop by the coffeeshop below my home. I think I learned to eat chilli from dipping those crunchy loh pig ears in the sauce. Oh, how I miss those loh pig ears! You can hardly find them these days although there was a revival of sorts some years ago. These days there's a surfeit! The stalls are run by Chinese PRC nationals and set up outside neighborhood kopitiams. Their meats, however, have improved a lot. It used to have an orange hue, rather a turn-off look. Still, their stewed chicken feet aren't too bad.

If you ask the older folks, they would remember Sa Kong off Sims Avenue. It is right opposite Lor 17 and was an industrial place as well. I think the industries there dealt with sand  or "sa" and timber. One key plant made Suave hair cream and I was often tasked to go buy some for my mom and sisters. It was supposed to be the best for wavy hair. (Suave or Helena Curtis was one the the earliest factories to support our government in its economic expansion in the 60s, providing jobs for the local populace.) My dad didn't use Helena Curtis products. He would ask me to buy him Tancho (a green waxy hair cream) from the provision shop. It was also sold at the mama shop just outside Sa Kong too.

All these businesses gave character to the place. It was very painful to see them being slowly replaced by closed-up offices and nondescript businesses (usually moneylending businesses). Sims Avenue widened from a two-lane road into a three/four-lane one-way street. There is more traffic now but it's not as bustling anymore. It has become a very transient place full of foreign workers especially from the PRC.

Previous story: Race Riots; Next story: Book of Life
Posted by TC Lai at 10:24 AM