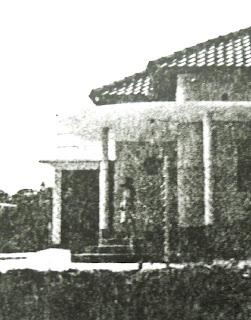 Shortly after I turned six, I came to know that I had another mother. I was on a scooter ride with my dad and he had brought me to visit a 'friend'. This friend was a woman who lived in a temple of sorts in Kim Keat.

It was when my dad asked me to call her "dai ma" that I began to wonder about her. 'Dai' is the Cantonese word for big, meaning also 'first'. By asking me to call this woman dai ma, my dad was essentially saying this woman was his first wife.

I didn't quite understand all this at the time. My dad was a strict disciplinarian and I often did as I was told. And so I called her 'dai ma' - softly at first as I felt strange calling another woman my mom. But dad would reprimand and say to voice it louder. I reluctantly did so, else any disobedience would bring a sharp slap up the back of my head. It was his habit, something my mom disliked. What if they became stupid, was her repose.

I don't know when my mom got wind of this 'other' woman. I think it was my younger sister who let the cat out of the bag. From that day onwards, this dai ma became The Other Woman. My mom would curse and swear everytime this Other Woman was mentioned. And she would tell us to never call her Dai Ma. We kids were then caught between a rock and a hard place. So we would do one thing and afterwards confess to another. None of  us were happy. But we were mostly on our mom's side. We later got to know that this Other Woman had adopted a child. Her name was Ah Woon. Mother did not have kind words for her either. It did not help that this girl was rather vain.

My mom, true to her generation, would always lament that my dad was under this Other Woman's spell or "kong tow" (Cantonese for black magic). She would often visit her temple medium friend in Marine Parade to get counter measures. I'm not sure if they were effective at all.

This Other Woman was very unlike my mom. She had a lean and longish face and was skinny. She smoked (well, my dad smoked too) and from what I could tell, she ran a mahjong den beneath a temple in Kim Keat. She could talk to men folk like they were her buddies. And she was much older than my dad. (More the reason my mom believed it was kong tow at work.)

My dad would years later send me an old photograph. It pictured him standing with this Other Woman in front of a small white bungalow. Underneath the photo were the words, "My first wife." His first wife? It was the first time he made such an open admission.

Well, after so many years, I was not shocked any more. We had suspected as much. My mom's theory is that this first wife could not give birth, why my dad went and married the second time. This second union produced six kids: Me and my siblings.

What I don't know is if my granddad knew anything about this. He and his generation of guys usually had one or more wives. Some wives were even sisters. We cannot really judge them because in those times women had little economic opportunities. When times got bad, they would become less picky and just marry for survival. If a guy could provide home and board, it was better than being homeless and worse, a bargirl or prostitute. And some guys did have a gift of the gab and wandering loins.

My grandad was well-off, so he ought not to have a shortage of women eyeing to be his second or third wife either. It was said he had four, most of them staying in the Bukit Timah and Lavender Street areas. He started his workshop business there and later expanded into real estate. His workshop building is still there in that wonderful row of shophouses, the ones with the angular balconies. They have been conserved and now exist as part of a condominium. You can see them just outside V Hotel topside of Lavender MRT station.

My grandad was a soft-spoken man with a beautiful head of silver hair. It is sad that I got to know him late and did not get to record the events in his life as I would now as a Memory Corp ambassador. He had thirteen children. The last I saw him was on his death bed in a hospital. Prior to that, he lived in his big Chinese-style bungalow in Duke Road, Bukit Timah. I would visit him with my parents and enjoy plucking fruits like chiku and rambutans from his garden. We would also pick frangipani flowers from his driveway and used them as tea leaves for a herbal drink.

Years later, my sis would meet up with my dad to get some answers from him. He had no good ones to give. He was staying with Ah Woon and her kids then and he confessed that they were just waiting for him to die to collect their inheritance. I could only sigh when I heard that. That's what that can happen when the kids are not of your blood and genes. But then again, good parenting can help void that. And it was apparent my dad hadn't been a good parent to either family. I wonder what my grandad would say or do about his son's sorry situation. Give him a good smack up the back of his head? That would be nice to watch.

(Afternote: I later found out that my dad's first wife was another woman. She left him after finding out that he had a mistress. That mistress was dai ma.)